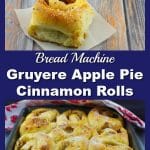 Whenever I taste something really delicious, I will go to great lengths to hunt down the cook and get that recipe. I have spent way more time than I care to admit roaming the back hallways in hotels, conference centres and restaurants, trying to track down the maker of whatever deliciousness I was served.

But you'd be surprised at how many cooks won't share their recipe, special ingredient or cooking tip when I do finally track them down. Obviously I think that's ridiculous because sharing recipes is what I do. But that's because it's born out of a personal philosophy that good food is meant to be shared. And I created this forum to do just that!

Fortunately, the special ingredient in this recipe was graciously shared by a cook that subscribes to the same philosophy as I do. So I have incorporated it, along with the glorious medley of apple pie and creamy gruyère cheese into these award-winning easy Apple Pie Cinnamon Rolls (Winner of Safeway's Destination Cheese Champions 2012).

These Apple Pie Cinnamon Rolls are the ultimate breakfast or brunch potluck idea because these scrumptious rolls can be made ahead and frozen until you need them. *There is a no bread maker/bread machine option as well (see recipe notes)

But sometimes it's not about whether the cook wants to share the recipe or not. About 5 years ago, I was eating a brunch at Fort Steele, near Kimberley, British Columbia (it's one of those heritage towns, where you can go look around at how things supposedly were in the olden days and eat old-fashioned baked goods in their bakery etc..; similar to Heritage Park in Calgary) and I tried a dessert that was one of the most scrumptious chocolate cakes I've ever had in my life! I just had to have the recipe...

Imaging that this cake took hours to cook in their old-timey wood-fired brick oven,  I dragged my reluctant family from building to building to hunt down the source of that dreamy dessert, only to discover in the end that it was one of the items the fort ordered from Sysco. Talk about disappointing. Now there was no hope that I'd ever be able to replicate it. Now I'm all about cooking from scratch, but I was willing to make an exception in this case. But then I found out that I couldn't even buy it because Sysco doesn't sell to the public! Sadly, even when I find the source, not all my food expeditions end in success.

However, I was lucky enough to be  able to replicate the deliciousness in the cinnamon buns that I discovered when I worked out of Spruce Lodge, because the cook was kind enough to share this tip with me - add lemon zest to the cinnamon roll dough. Wow-what a difference that little addition makes! Then I throw it all in the bread maker and the result is a delicious and easy homemade bread machine cinnamon buns. I am all for skipping the hard labor when it comes to making any kind of dough. *But if you don't have a bread machine, don't fret. When Safeway published my recipe, they used a refrigerated French bread dough to make the recipe quicker (** see recipe notes)

If you are looking for unique ideas for a breakfast potluck, then this is your bread machine cinnamon bun recipe! It's a little more sophisticated than your typical cinnamon roll and well, cheese, apple pie and cinnamon rolls were just meant to be together.

In my food travels I have acquired a lot of great recipes and cooking tips by simply asking. Luckily, the cooks that are willing to share far outnumber the ones that won't. So, I will continue to pay it forward by sharing my recipes, because good tasting food is meant to be shared, even if is it ugly! 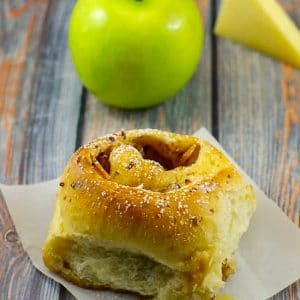 These award-winning Gruyère Apple Pie Cinnamon Rolls are made in your bread machine, then baked to perfection in your oven and smothered in vanilla mocha glaze. Apple pie and cinnamon bun are just meant for each other! These can be made ahead and frozen and are an excellent brunch potluck idea or bake sale item. *See NO bread maker/bread machine option as well.
5 from 4 votes
Print Pin Rate
Course: Dessert, Snack
Cuisine: American
Servings: 12 buns
Calories: 125kcal
Author: Terri Gilson
Prep Time: 10 minutes
Prevent your screen from going dark

📖 Variations ***If you don't have a bread machine, these cinnamon buns are still possible! When Safeway published my recipe, they used a refrigerated french bread instead of this breadmaker dough to make it quicker. I am unable to find that type of bread at Canada Safeway, but if you live in the US, you may have some luck! Here's their short-cut version: 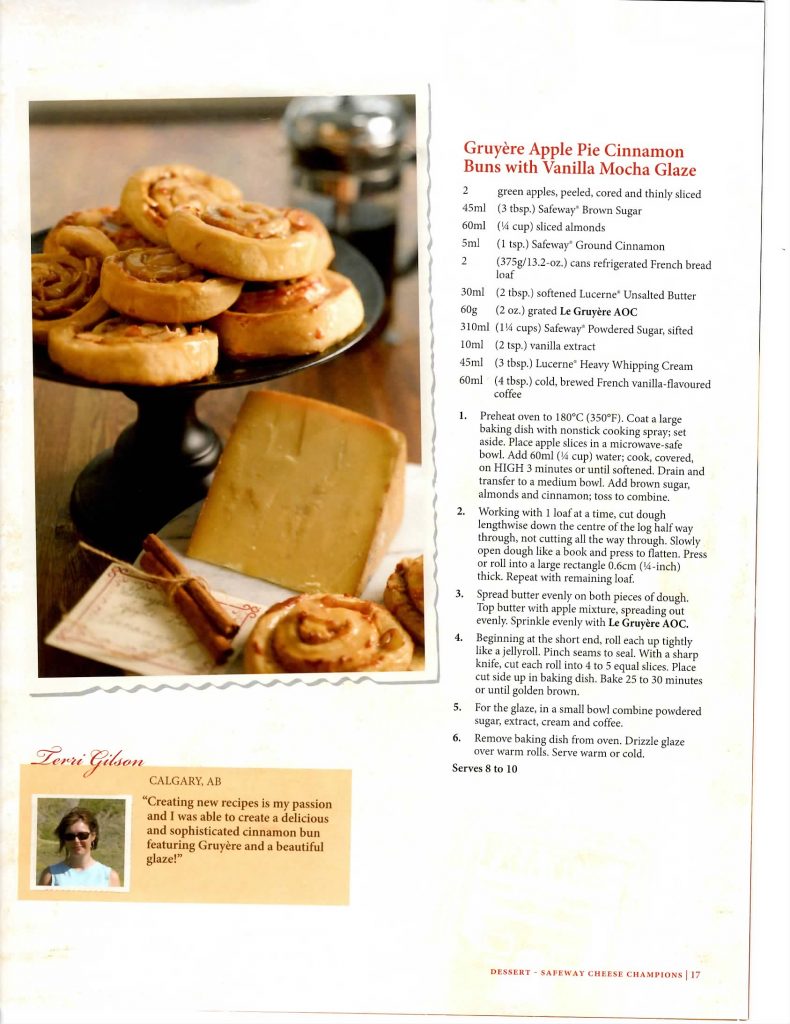