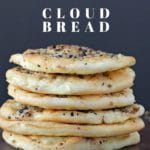 This Everything Bagel Cloud Bread is like an Everything bagel but without all the calories or WW points! It's light and fluffy, quick and easy to make and 0 WW points, yes I said ZERO, points on the blue plan! It also makes a great side to soup, salad or eaten straight up on its own.

I've seen a lot of food trends come and go over the years and many that I wished would have just rolled over and died a lot sooner than they did. Remember red velvet everything? When Red Velvet Chicken strips came out I was sooo over that food trend! Well, Tiktok Cloud Bread may be a trend, but it is not that kind of trend -it can stick around as long as it likes because it's darn good! And it really does taste so light and fluffy that you feel like you're eating a cloud. Yet, it's totally satisfying.

Actually, cloud bread is not a new concept- it's been around a while and was pretty popular back in the day when the Atkins diet was all the rage.

💭What is cloud bread?

Okay, so cloud bread is not actually bread. Although it does have a bread-like consistency, it's something closer to angel food cake in that it also uses whipped up egg whites and in terms of its texture. But unlike angel food cake, cloud bread is flourless, is naturally gluten-free and has next to no carbs. There are both savory and sweet versions of cloud bread recipes.

It's not easy to find bread that is ZERO points on Weight Watchers, but because cloud bread is naturally a low-carb bread, it's the perfect WW bread. And that's good enough for me, especially when I don't have to count it!

You will be blown away by just how easy this Cloud Bread with Greek yogurt is to make and how few ingredients are required. Obviously I did not invent cloud bread, but my recipe is unique from others out there in that I make it with:

A lot of recipes use cream cheese and although I like cream cheese, I prefer using non-fat Greek yogurt because it has nearly 3X the amount of protein in it.

See me make cloud bread on Tiktok: Here is the How to make Everything Bagel Cloud Bread Tiktok VIDEO

Cloud bread is amazing on its own, or even toasted, but it's a great accompaniment to many dishes!

You'll definitely want to try it with my dairy-free and gluten-free  WW Corn Chowder Soup!

So if you're looking for an unbelievably delicious and easy Cloud bread recipe, then give this Everything bagel cloud bread a try! 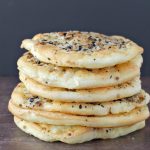 This Everything Bagel Cloud Bread is like an everything bagel but without the calories or WW points. It's light and fluffy, quick and easy to make and 0 (ZERO) WW points on the blue plan! It also makes a great side to soup, salad or eaten straight up on its own!
Course Side Dish, Snack
Cuisine American, Canadian
Keyword cloud bread, everything bagel, weight watchers
Prep Time 10 minutes
Cook Time 25 minutes
Total Time 35 minutes
Servings 6 servings
Calories 38kcal
Author Terri Gilson
Prevent your screen from going dark

See me make cloud bread on Tiktok: Here is the How to make Everything Bagel Cloud Bread Tiktok VIDEO *NOTE: Medium peaks hold their shape pretty well, except that the tip of the peak curls over on itself when the beaters are lifted. Stiff or firm peaks stand straight up when the beaters are lifted. Need a hand mixer? I have the Hamilton Beach 6 speed and I love it! (affiliate links)