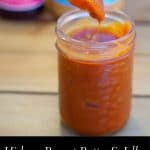 It's nothing fancy, " she said. "We're just having goober burgers."

Hmm... that didn't sound at all appetizing. In fact, I wasn't even the slightest bit intrigued - just a little horrified. At the time, I had no idea what a goober burger was but it definitely didn't sound promising. In my world, goober was not something you ate.

I love BBQ sauce and I can't get enough of it on my BBQ'd food. That's why I created this delicious PB&J BBQ sauce. To me, BBQ sauce is the crowning glory; the je ne sais quoi.  BBQ just isn't BBQ without barbecue sauce.

💭What is a Goober burger?

A goober burger is spelled "guber" as well and guber means peanut; also known as the ground pea of the south, or as it is sometimes called, the gouber or pindar peanut. In essence, a Guber Burger is simply a burger with peanut butter. You can add all your regular fixin's but you put peanut butter on it as well.

When we first moved to Calgary 25 ish years ago, we often went to my husband's Uncle Harry and Aunt Joan's when family was in town. And Aunt Joan always made the most amazing food, however unfancy she claimed it was. You can't get full on fancy anyway. It was real, home cooked and delicious and as a starving student on a tight budget, her comfort food was an oasis in a desert of Kraft Dinner and cafeteria food.

Yet, it was still tough to get excited about a food with the same name as spit.

Of course, peanut butter is the main ingredient, but you'll also need the following ingredients:

Now, not being the biggest a fan of peanut butter, it was a particularly hard sell. I loved burgers, but tainting my burger with peanut butter was a pretty big risk. If I didn't like it, which I was pretty sure I wouldn't, my precious burger would be a write-off. But I guess I was either feeling particularly adventurous that day or just very hungry, because Joan convinced me to try it.

And WOW!  I was in love! Who knew that peanut butter could completely transform a burger into something so amazing!

In fact, I loved this guber burger so much that it inspired me to create this Peanut butter BBQ sauce. It's great for any meat or whatever you like to add BBQ sauce to. I have used it on chicken, pork, beef on a bun, kabobs, steak or burgers (or veggie burgers).

💭When to add BBQ sauce

When it comes to BBQ sauce, I say "the more the merrier"! But I guess I am a bit BBQ sauce crazy. I must get it from my Dad (Read more about that here!) Yes, it's messy and requires cleaning your grill after and if you're not careful, it can burn the outside of your food. But it's worth it! And there are tricks to prevent burning - you just have to know when and how to put it on.

Here's when to add BBQ sauce to your meat: The meat is cooked on the grill normally without sauce until it is about 10 minutes from completion. The sauce is then lightly brushed on in two or three layers as the meat continues to cook. Flare ups and particularly hot areas of the grill sauce be avoided so as to not burn the sauce or overcook the meat. After the meat has finished cooking, an additional layer of sauce should be added off the grill to create a mouth-watering candied layer over the meat.

So, if you are looking for a unique and healthy BBQ sauce, give this one a try! It's a gluten-free Hickory BBQ sauce. And if you've never tried a goober burger, live a little and do yourself a favour - try it! You won't be disappointed. 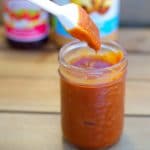