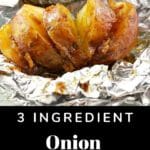 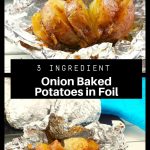 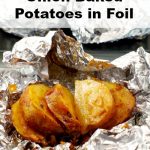 When we're young we take a lot of things for granted, especially when it comes to food that we don't have to cook ourselves. These potatoes were one of those things I took for granted. My Grandma used to make them and like most things when you're a kid,  I didn't have the appreciation for them back then that I do now. And although I have often longingly thought about these Onion Baked Potatoes in Foil over the years, until recently, I've never actually made them myself.

This is such an easy baked potato in foil recipe and a simple way to add some variety and a little pizzazz to your baked potato repertoire.

You only need 3 ingredients for this recipe:

I guess these would be considered old skool hasselback potatoes because my Grandma was making these 45 ish years ago. The big difference is that they are not peeled, nor are they cut as thin as hasselback potatoes, meaning way less work! And that's always a good thing because I'm all about less work. Why peel potatoes when you don't have to? Plus, the potatoes peels are full of nutrients! And why make 12 cuts when you only have to make 4 or 5? Am I right?

If you're making these potatoes on the grill, then why not try them with my Weight Watchers friendly BBQ Beer Can Chicken?!

There are a lot of baked potato recipes out there and even a few that use butter or margarine with onion soup mix. But I did not see any others that used the exact same method as this. And this method is far superior to the others when it comes to being easy AND locking in the flavor!

Most of the sliced baked potato with onion recipes instruct the cook to pour the melted onion and butter over the potato. However, you potentially lose a lot of flavor that way. With these Lipton Onion Soup Potatoes, you spread the onion/butter mixture, unmelted, between the slices, then you wrap in foil and bake; it literally locks and bakes in the flavor. It takes a little more time than just pouring melted butter over the potato, but it is well worth it for the rich buttery, onion flavor you get in the end!

Bake in oven: on 400 degrees F for 40- 45 minutes or until fork easily goes through the potato.

Grill/BBQ method: Follow the above directions, but bake on med-high grill/BBQ (400 degrees F, with lid down) for 30-40 minutes until fork easily goes through the potato.

I always bake these on a baking sheet when I do them in the oven, as they tend to leak.

These sliced potatoes with onions in foil in the oven are an easy, delicious and economical way to add some excitement to your baked potatoes! 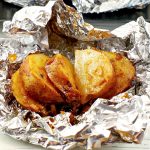