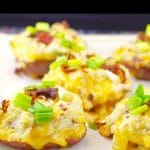 When it comes to human food,  I am constantly running interference with the cat. He begs for food incessantly, steals it right off unmanned plates  (including an attempt to steal my Caesar Twice Baked Potatoes!) and he would even eat raw meat directly out of the grocery bags if we didn't lock him in the bathroom while we unloaded groceries.

With Milo in the mix, defrosting food, cooking food and eating food all come with their own set of complications.

And photographing food is no exception. I can't turn my back for a minute, lest my culinary creations end up violated by a creature who's tongue also does double duty as toilet paper- ick! But I have to say, I can't help but admire the gall.

I guess that's why I'm a cat person.

Milo is not allowed on the table, by the way...

Anyway, on to the twice baked potatoes (that I was fortunate enough to rescue in time). I always make too many potatoes. It's just this thing I do. They come in those enormous bags I feel obligated to buy because they are a good deal. Then I bake way too many of them, with the hope that someone will eat them. And when they don't and I happen upon them shriveled and decaying at the back of the fridge (far more often than I'd like to admit), yet another wave of food wasting guilt washes over me as unsuccessfully try to pawn them off on the cat. That is, until I discovered twice baked potatoes. Now the kids actually get excited when baked potatoes are on the menu because they know  we'll have leftover baked potatoes and then this easy Twice Baked Potato recipe is on deck!

I am a huge fan of food that does double duty and can easily be morphed into a second (even yummier) meal with very little effort. I use a homemade Caesar dressing (I had leftovers from my Grilled Chicken Caesar Salad the night before I made these), but you can substitute a store-bought one.

So, the next time you are baking potatoes, go ahead and make too many. They won't to go to waste with these Caesar Twice Baked potatoes and you won't be disappointed (unless the cat gets at them first)!

🔪How to make them quicker

If you are wondering how to make twice baked potatoes a faster way, just microwave the potatoes first. Video: How to bake potatoes in the microwave

🥘What to serve with loaded twice baked potatoes

So if you're looking for a great side dish that will use up your leftover baked potatoes, then give these a try! 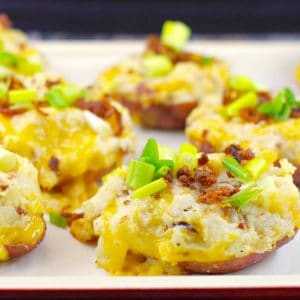