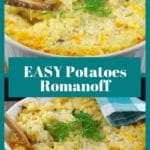 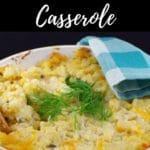 Potlucks are not only fantastic because you just have to make one thing and you get to eat tons of other things, but you also get to try new things.

That's precisely how I have acquired so many of my recipes. And this Potatoes Romanoff is no exception.  I tried it at a potluck 20+ years ago, got the recipe and I've made it countless times since. It really is the ultimate potluck dish! Although it may be summer, it's always potluck season! And if you don't want to turn on the oven, no problem,  because you can make this in the slow cooker instead.

Not only do I LOVE potlucks, I love easy, quick, make-ahead potluck dishes, especially ones that I have the option of making in my slow cooker. The slow cooker does all the work while I sleep and I don't heat up my house!

I recently had a conversation at work about 'that hash brown dish' as it is known in many circles, or 'hashbrown casserole' and even 'funeral potatoes.' Everyone knew what it was, yet they all knew it by a different name and a slightly different variation of ingredients. I have always known it as "Potatoes Romanoff". And when I googled this recipe, there were many names and variations, but none exactly the same as this one. I've heard of it even being made with cottage cheese and cream cheese, but I make mine with frozen hash browns, sour cream, onions, butter, cheddar cheese and mushroom soup. It can also be made in a slow cooker (see instructions below)

I think this Potatoes Romanoff  is so popular because it's classic comfort food; creamy, potatoey, melty cheese deliciousness. And although it's not exactly weight watchers friendly, I do use the low-fat versions of cheddar cheese, sour cream and cream of mushroom soup to lighten it up a little. And in the end, believe me, it's worth EVERY SINGLE WW POINT!

And because I love this hashbrown casserole so much, I felt that it must live on... So, I used the base to create my Maple Sausage Brunch Bites.  This breakfast/brunch recipe is one of my most popular recipes! And it won the grand prize in the Johnsonville Sausage Contest in 2014.

When it's hot out, you definitely don't want to be turning on your oven. Another great thing about this recipe is that you don't have to; you can also make it in your slow cooker. It's just as easy - simply cook it on high for 3 hours or low for 6 hours.

If you have a potluck coming up, then give this Potatoes Romanoff a try. It's always a hit! 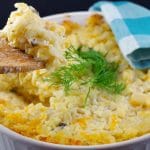