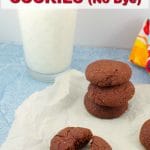 This is a great little healthy dessert for the lunch bag! My inspiration for this healthy cookie recipe came out of my quest to create a healthier version of the red velvet cookie.

This Healthy Red Velvet Cookie incorporates natural ingredients like beets (no red dye), real butter and whole wheat flour.  No matter how healthy I am trying to be, I still need chocolate and cookies in my life! Doesn't everyone? And somehow I just feel better about eating cookies if they have vegetables in them...

Anyone recall the groom's red velvet armadillo cake in the 1989 movie "Steel Magnolias"?

Or am I just dating myself? Or maybe I just care about cake way too much? When I hear red velvet, I automatically think: southern United States. Yet, however popularized the flavoring is in the southern U. S., that is not its origin. Red velvet is one of those foods that has a bit of a sordid history.

In fact, Adams Extract, a Texas company, is credited with popularizing and spreading the red velvet cake joy across the United States during the Great Depression in an attempt to sell more red food dye. Red Velvet cake and its original recipe are well-known in the United States from New York City's famous Waldorf-Astoria Hotel and it's also known as the "Waldorf- Astoria" cake.  But prior to the red food dye being added, the reddish hue was created by a chemical reaction between vinegar, cocoa, and buttermilk, with the color being considerably more subtle. That's where the red originally came from, but the velvet description actually came from the texture of the cake; the cake was known to have a smooth and silky fine crumb.

Up here in Canada,  Red Velvet cake was a popular dessert in the restaurants of the Eaton's department store chain in the 1940's and '50s. It was even touted as an exclusive Eaton's recipe. And Eaton's employees that knew the recipe were sworn to secrecy. Many people were under the false assumption that the cake was the creation of the department store matriarch, Lady Eaton.

💭Why beets in Red Velvet?

Well, beets are reddish, so it sort of makes sense to make red velvet stuff out of them. But the use of beets in red velvet became more commonplace when foods were rationed during the second world war. Bakers used boiled beet juices to enhance the color of their cakes and beets were also found in some red velvet cake recipes, where they were used to retain moisture. Generally, I'm not a fan of war food, for obvious reasons like rationing and using as little meat as possible (I am a meat girl, so this does not go over well with me.) But this is, by far, is my favorite war food!  You can read more about why beets were used to make red velvet HERE.

Use a good quality vanilla - it makes all the difference! You can buy a big bottle of 'pure vanilla extract' at Costco for a very reasonable price.

In recent years, red velvet has become increasingly popular in North America and many European countries. In 2009, red velvet cake flavouring was part of 1.5 percent of all items on menus. By 2013, it was in 4.1 percent of menu items. Then the world went crazy and there was RED VELVET EVERYTHING!

In 2015, The Calgary Stampede was offering  up Red Velvet Chicken Strips: Grade A chicken breast strips deep-fried in a batter of red velvet cake mix; served with fries, of course. The Calgary Stampede always serves as a bit of a barometer when it comes food trends. If a food is insanely popular that year,  you can expect that food to somehow be desecrated, deep-fried and morphed into something on a stick. Yet, by Stampede 2016, no red velvet to be found. Hmmm......

Does that mean that red velvet is sooo 2 years ago? Who knows?! I try to track and predict food trends and they are as unpredictable as the weather here in Calgary. But whether it's still taking over the world or not, it doesn't matter. Red Velvet is so utterly ingrained into our food culture now that it's here to stay- at least in my foreseeable future. That's my foodie forecast anyway.

This red velvet cookie with beets is a healthy dessert recipe option and a great kids lunch box idea. Although this is the end of my "Lunch bag food"series,  I will still periodically be posting more great lunch bag food recipes and lots of quick, easy and healthy recipes, so stay tuned!

If you like healthy red velvet, then try my Healthy & Natural Red Velvet Pancakes with Sweet Chocolate Cream Cheese Butter 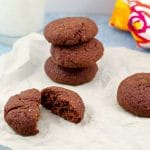 **Note: results may differ (especially the color of the cookies), depending on brands of ingredients used My Amazon Recommendations (affiliate links)