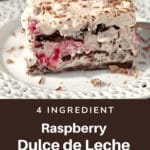 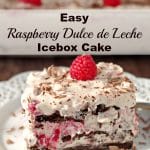 I went raspberry picking with my family again this summer and it was awesome, as always. Picking fresh berries is one of my fave family activities, which is no surprise, given it involves food! This Dulce de Leche Raspberry Chocolate Icebox Cake was the delicious result of that picking.

This year I wanted to come up with a new recipe for the summer raspberries we picked- something really easy, NO Bake (we had no air conditioning and it was HOT!) and something that could quickly be made with frozen raspberries, since I freeze them right away to preserve them. So I thought a Raspberry Chocolate Icebox Cake would be the perfect idea because it's such an easy dessert recipe! It's not only the best summer raspberry cake, this no bake summer berry icebox cake takes about 15 minutes to throw together and is unbelievably yummy. When you taste it, you won't believe just how easy it is! It was inspired by my Raspberry Tiramisu Tarts.

Chocolate Graham crackers make all the difference in this Raspberry Chocolate Icebox cake. Most icebox cakes are made with regular graham crackers, but trust me, for this raspberry icebox cake you're going to need chocolate graham wafers. But sadly, recently I heard that they may have been discontinued. You can no longer order them on Amazon and since I haven't been to the U.S. in a few years (due to covid), I have no idea if I can find them there. So, you can make them yourself or use Mr. Christie Chocolate Wafers or Nabisco Famous Chocolate Wafers (affiliate link).

Add one layer of chocolate graham crackers to the bottom of a 9 X 13 dish and add ⅓ of whipped cream mixture.

Add another layer of graham crackers

Add another layer of whipped cream .

Add fresh raspberries to the top of the cake.

My family were all disappointed when this dessert was gone because everyone said they wanted seconds. And I can attest to that- this cake is totally addictive! I'd have eaten the whole thing myself if I could. They all agreed that they liked it so much because it was such a nice light dessert, as we'd had a pretty heavy BBQ meal of steak, Onion Baked Potatoes in Foil (3 Ingredients) and Mexican grilled corn on the cob (elote).

How to freeze fresh raspberries

When you pick raspberries, they are often smaller than you get in the store and therefore spoil faster. So I would recommend that you freeze your raspberries immediately after picking, as they go mushy really quickly. Once washed, lay parchment paper over cookie sheet and arrange berries in a single layer and freeze until solid. Once frozen, transfer them to a freezer bag.

I also used them as ice cubes in my wine.

💭What is an Icebox Cake?

Interestingly enough, icebox cakes aren’t technically even cakes. They are a no bake cake that just resembles a cake once the whipped cream softens the layers of wafer cookies or crackers, just enough to make them tender and flaky. And that happens when they are set in the "icebox" as it was referred to back in the day,  before electricity and refrigerators existed. It's in the "icebox" (aka fridge), that they magically transform into a light and elegant torte-like dessert.

And if you love chocolate icebox cakes as much as I do, then you'll want to give my Easter Creme Egg Icebox Cake a try, Seriously, you don't even have to wait for Easter!

You will need an electric hand mixer or a stand mixer (affiliate links) for this recipe and a 9X13 pan.

Cover this cake with plastic wrap or store in the fridge in an airtight container for up to 3 days (although it likely won't last that long). These ingredients do not stand up well to freezing.

This recipe makes 12 servings. However, you can half, double or triple the recipe by clicking on the blue serving number and selecting the number of servings you'd like. The ingredient quantities will automatically adjust. You will just need another pan.

The great thing about this Chocolate Raspberry Icebox cake is that it can be made with frozen raspberries you grab from the grocery store, so it's ideal for hot summer days or any time of the year. Because sometimes you just don't want to bake. So if you're looking for icebox cakes, and one that's super easy, unbelievably delicious and NO BAKE, then give this one a try. It's perfect for feeding your family, a crowd or bringing along to a potluck!

Did you LOVE this raspberry icebox cake recipe? If so, please leave a 5 star rating and comment below!

Here's what others are saying: "This was amazing!!! I love chocolate desserts but I often find them too sweet. I was so surprised how easy this one went down. It was smooth, chocolatey, light and left everybody wanting more."⭐⭐⭐⭐⭐