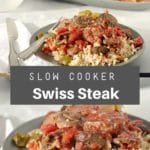 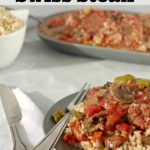 Swiss Steak is pretty serious comfort food. And when I was growing up it was something my Mom would make on a regular basis.

The only difference is that my Mom made hers on the stove and I make my Old fashioned Swiss Steak recipe in the slow cooker because I can dump and go! That way I come home to a delicious hot meal at the end of a workday, that I didn't even have to slave over. Plus, it's only 8 WW points on the blue plan per serving!

🍲 Should you buy an Instant Pot?

I LOVE small appliances and if I had the room I'd buy them all! But the slow cooker has got to be my absolute fave small appliance because, as I said, it does the work for me. When the Instant pot became a huge trend, I'll admit I was nearly seduced into getting one; like sooo close! But then I read this article and it changed my mind: Is the Instant Pot Worth the Hype?

Since the Instant Pot really only cooks the recipe in about HALF the time, it really wasn't worth it for me. When I make something in my slow cooker I'm not generally sitting around waiting for it to cook; I'm using it because I'm going to work, out for the day or busy doing other things. So to buy another appliance that does the same job, but in half the time (making my meal in 4 hours instead of 8) doesn't make sense to me. And I've never felt a need to buy a pressure cooker anyway, so why would I get yet another small appliance that I don't have room to store? As far as I'm concerned, the slow cooker is still king!

💭What is Swiss Steak?

Swiss steak is called such not because it's from Switzerland, but because it's swissed, which is a process  of tenderizing the meat by rolling or pounding it prior to cooking. In the UK and in some parts of the United States it's is also called smothered steak. You can read more about that HERE.

However, because this is slow cooked, going through the “swissing”” process is not even necessary. Again, the slow cooker does that for you!

This Swiss Steak crock pot recipe requires no pre-cooking and is the ultimate comfort food and dump and go recipe! I love this recipe because it’s not only easy and there's very few ingredients and the crockpot does ALL the work! It's also economical because you use a less expensive cut of steak (round steak).

So, if you are looking for dump and go hearty meals, give this Slow Cooker Smothered Swiss Steak a try and come home to a delicious hot meal! 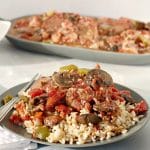 *Note: Can be made ahead and frozen (it freezes really well)! If you're in the market for a slow cooker, then check these out. I have the Hamilton Beach 6 Quart, Programmable (below) and love it! (affiliate links):

This post is part of  The Country Cook's Weekend Potluck!