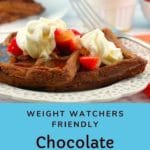 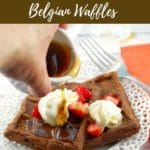 "I could have been eating chocolate waffles this entire time, instead of boring, old,  plain waffles?!" was my first thought. Then, WHY had I not thought of waffles with chocolate before this!?

Brunch just got a whole lot better with these Weight Watchers Friendly Belgian Chocolate Waffles (at only 5 WW points on the blue plan) in your life! Because chocolate makes everything better, especially when it's perfectly acceptable to have it for breakfast! After I had been making this waffle recipe for many years, one day it dawned on me, that I could easily make them into chocolate waffles by substituting some of the flour with some cocoa.

This notion has completely revolutionized breakfast, brunch and waffle eating in my little corner of the world. And the kids were completely blown away the morning I set these chocolate waffles down in front of them, instead of the usual boring old plain waffles.

I could have kicked myself! All those wasted years....

I am not just a huge fan of chocolate, I require chocolate. And most women I know feel the same way. I'm not the only gal at work that has an 'emergency chocolate' stash in or around her desk.  And that's exactly why these waffles are the perfect Mother's Day breakfast or brunch recipe.

Older kids can make them for Mom and little kids can help Dad. This is such an easy waffles recipe and although it involves beating egg whites to a stiff consistency, once you do it, you'll see how simple it is (See VIDEO instruction in NOTES in recipe). And the whipped egg whites really are the magic in this recipe; it's as if they lift up the batter, making it light and airy and elevating it to an entirely new level of deliciousness!

And that's really the difference between Belgian and regular waffles...

These Chocolate Belgian Waffles are a little bit of an indulgence, but if you (or Mom) are following the Weight Watchers freestyle program,  they are only 5 Weight Watchers points on the blue plan, per waffle (before the toppings). And if you plug "Belgian Waffles" into your WW calculator, you'll get 14 points for the restaurant variety.

I will make up this entire recipe and freeze any left over  waffles (they freeze well). Then I can simply take them out on a busy morning (as I need them) and pop them into the toaster to get them a little crispier again!

I top them with fresh berries and a little light whipped cream and little low sugar syrup, so it keeps the points down for the toppings. And I'd say that's pretty good for a Weight Watchers chocolate indulgence! But that's the beauty of Weight Watchers, you (and your Mom)  CAN still eat these! You (or Mom) won't blow all your weekly points on this treat and Mom deserves a treat on her day.

So, go ahead and treat Mom to a no-regrets, chocolate indulgence this Mother's Day. And don't waste years of your life (like I did) eating boring old, plain waffles when you could have been eating Chocolate ones! 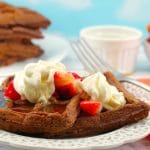 These scrumptious Belgian Chocolate Waffles are a delicious and simple brunch or breakfast idea! The magic is in the addition of the whipped egg whites, which make them extra light and airy. They can be made ahead, frozen and popped into the toaster for a quick breakfast! They are also Weight Watchers friendly Belgian Waffles @ only 5 WW points per waffle (on the blue plan)!
Course Breakfast, brunch
Cuisine American, Canadian, North American
Keyword Belgian waffles, chocolate, waffle
Prep Time 10 minutes
Cook Time 15 minutes
Total Time 25 minutes
Servings 16
Calories 162kcal
Author Adapted from: Waffles, pg. 37 A Guide to Good Cooking, Five Roses
Prevent your screen from going dark

VIDEO: How to beat egg whites to stiff consistency 💭 Top tip I will make up this entire recipe and freeze any left over  waffles (they freeze well). Then I can simply take them out on a busy morning (as I need them) and pop them into the toaster to get them a little crispier again!
Nutrition Facts
📋 Chocolate Belgian Waffles Recipe
Amount Per Serving
Calories 162 Calories from Fat 72
% Daily Value*
Fat 8g12%
Saturated Fat 6g38%
Cholesterol 50mg17%
Sodium 69mg3%
Potassium 256mg7%
Carbohydrates 17g6%
Fiber 1g4%
Sugar 3g3%
Protein 4g8%
Vitamin A 135IU3%
Calcium 112mg11%
Iron 1.3mg7%
* Percent Daily Values are based on a 2000 calorie diet.

This post is part of the Country Cook's Weekend Potluck!