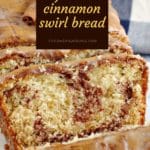 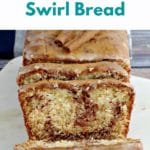 This recipe came about because I really wanted cinnamon buns and I wanted them STAT. But I wanted them without all the work and time it takes to actually make them. I also didn't have any yeast; yeast is a little hard to come by these days...So I made this Brown Sugar Cinnamon Swirl Bread instead.

With a simple and delicious 2 ingredient lemon glaze, this Cinnamon Sugar Bread is super easy and satisfying and it's just like eating a cinnamon roll, but in the form of a loaf! This easy quick bread recipe is popular anytime of the year and so simple to make.

My Overnight Cinnamon Sticky Buns are also quicker and easier than most cinnamon bun recipes out there, but I really didn't like the idea of having to wait overnight, nor did I have any frozen dinner rolls. Plus these days, there's not a lot of running out to the grocery store to get a couple of things. This cinnamon roll quick bread as the ideal solution!

It's surprising what a fabulous pairing cinnamon is with lemon. Many years ago I learned that adding some lemon zest to your cinnamon bun dough is the secret to extraordinarily delicious Cinnamon Buns! And although I make mine in the bread machine, they still take considerably more time than this bread. And I really didn't have the time or energy required to mess around with making actual cinnamon rolls. So not only did I add a lemon glaze to the top of this cinnamon bread, I added some lemon zest to the batter. And WOW does it ever work!

Fortunately, you're likely going to have most of the ingredients on hand! For this cinnamon bread recipe, you'll need:

Add ½ the batter to the greased loaf pan.

Then add ½ the cinnamon/brown sugar mixture to the top of the batter.

Mix in with a butter knife by cutting in and twisting knife in swirl motions in about 4 different spots.

Then swirl it a little more. *You don't want to swirl too much (you'll want to have some white showing/color contrast) or it won't look as nice when you slice it.

Repeat with remaining batter, then the rest of the cinnamon sugar and same cutting and swirling technique as above.

This cinnamon quick bread recipe serves 10. However, you can double or triple this recipe by adjusting the serving size on the recipe card. Just click on the serving size (it's highlighted in blue) and select the number of servings you’d like. You'll need extra loaf pans. *You can freeze the extra loaves (see storage, above).

You'll need a whisk, an electric mixer and a 9X5 loaf pan for this homemade cinnamon bread with icing (affiliate links)

Don't slice this loaf until you are ready the eat the pieces. Cut this brown sugar cinnamon bread as you need it, as slicing it dries it out more quickly. If you do slice it before storing it, make sure to cover the exposed pieces with plastic wrap.

This brown sugar cinnamon swirl bread is a quick bread so you don't need yeast. Quick breads rise because they use chemical leaveners like baking soda, baking powder or cream of tartar instead of yeast. And quick cinnamon bread is exactly what I wanted when I set out to satisfy my cinnamon bun fix! It only takes a few minutes to prep and an hour to bake. And not only is it superb with a cup of coffee, it makes a great breakfast, a mid-morning snack or even dessert!

So if you're also looking for the flavors of a cinnamon roll in a quick and easy way, then give this delicious cinnamon bread a try. With the tangy sweet glaze, this is the perfect way to get your cinnamon bun fix. You won't be disappointed!

And if you love quick breads, then check out my other quick bread recipes: Old Fashioned Date Nut Loaf, Healthy Carrot Loaf, Easy Tropical Banana Bread and my Classic Lemon Loaf (shown below).

Did you love this Brown Sugar Cinnamon Swirl Bread? If so, please leave a 5 star rating and comment below. 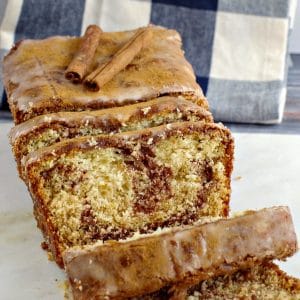