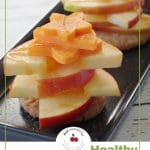 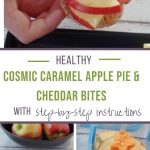 There’s a new kid in town; an apple that goes by the name of Cosmic Crisp. And if you haven't yet heard about this apple, allow me to introduce you... 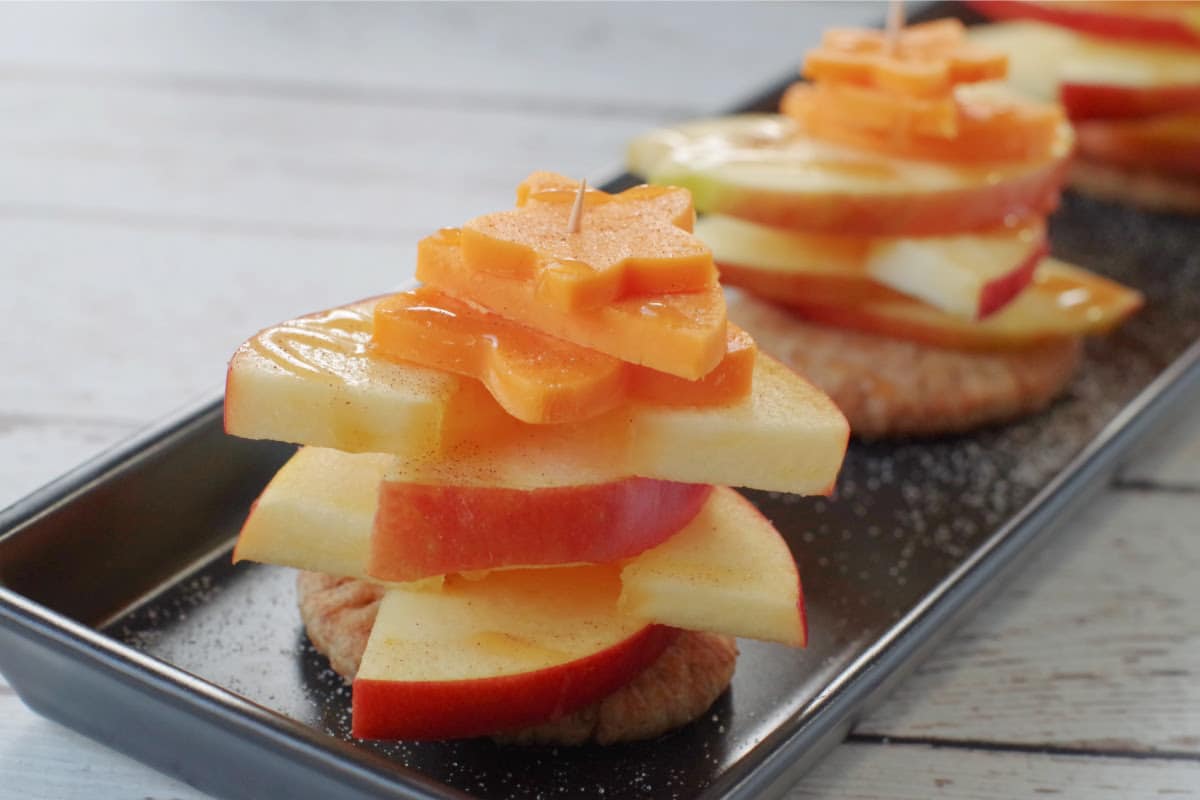 A cross between the ‘Enterprise’ and ‘Honeycrisp’, this sweet, large, juicy apple is remarkably firm, crisp and naturally slow to brown. So I've made them into this healthy Cosmic Caramel Apple Pie & Cheddar Bites recipe. They are a quick and healthy apple snack that's both sweet and savoury and makes a great dessert, breakfast or lunch bag snack! They are also Weight Watchers friendly @ 3 WW points on the blue plan.

These are no ordinary apples, my friends! And because Cosmic Crisp® Washington apples are crispier and sweeter than other varieties, as well as naturally slow to brown, they are the most ideal apple for raw apple snacks. 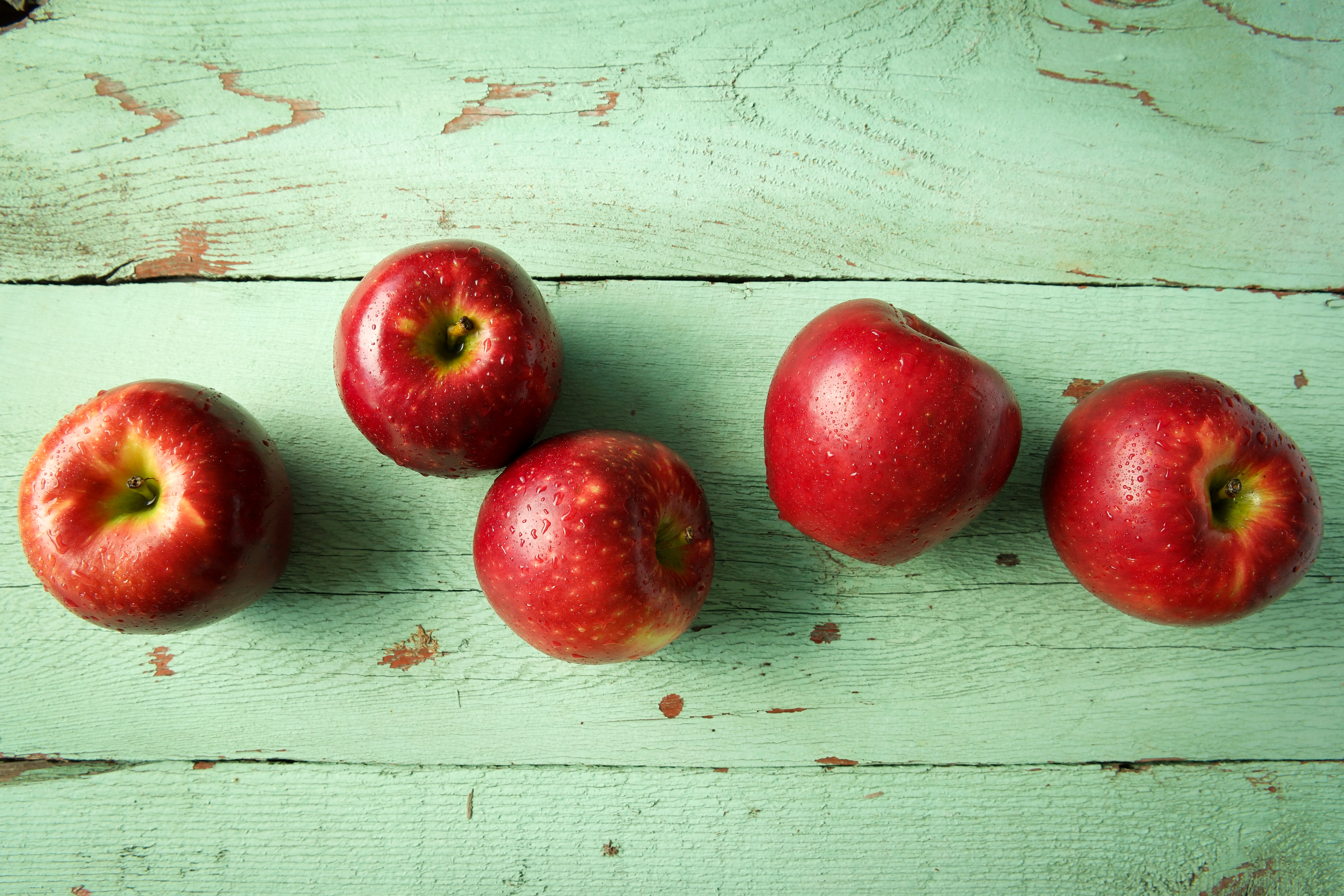 And you don't have to fret for even a second about sending them along in the lunch bag because, as I mentioned, they take forever to brown. If I was using any other variety of apple for this recipe, I'd have to prepare a lemon solution to soak it in to prevent browning, just so I could photograph it (trust me, I've been there!)  A typical apple starts browning within 10 minutes or less, but not these guys! 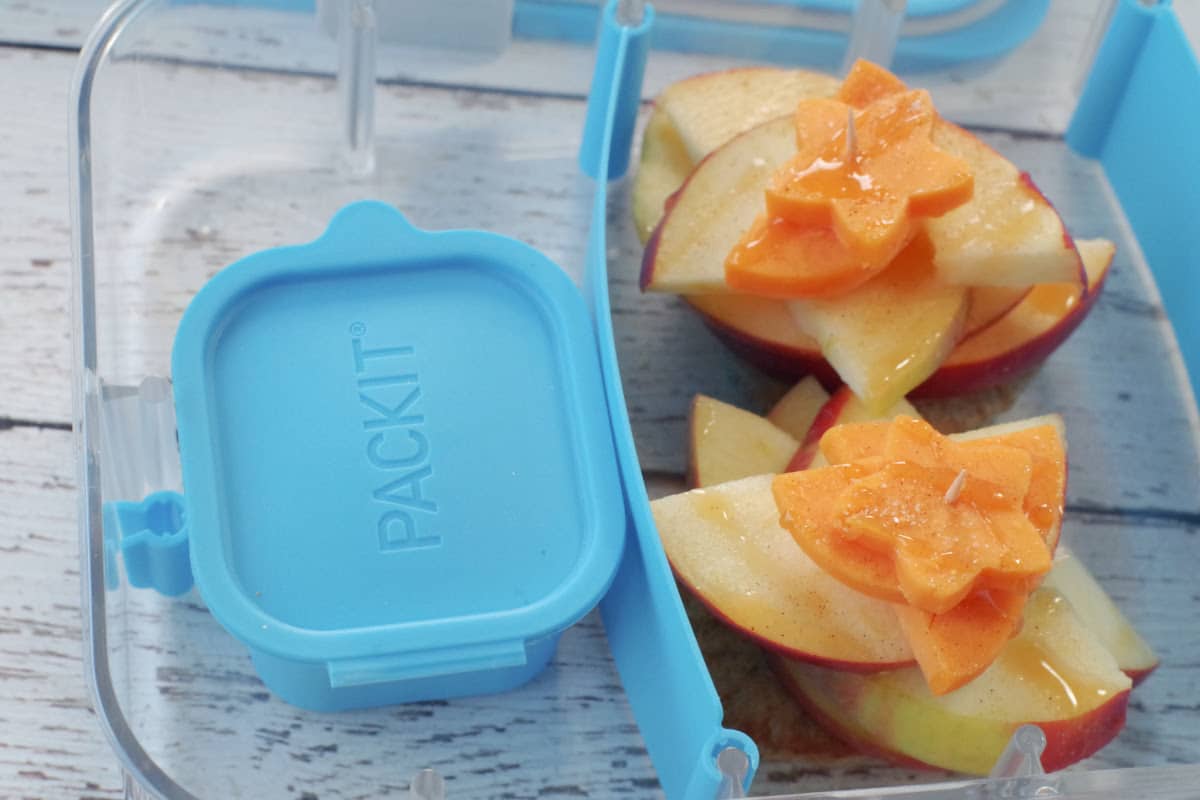 I added cheddar cheese to the healthy snack not only because cheddar cheese is a great source of protein, but also because apple pie with cheddar cheese is such a tasty pairing! It's no surprise this combo has been around for generations. Notice how the good stuff tends to stick around? But this apple pie and cheddar bite is not only a snack, it can be your dessert or breakfast (or even lunch or dinner haha.)  Trust me, we ate them for pretty much every meal (and everything in between) at my house! 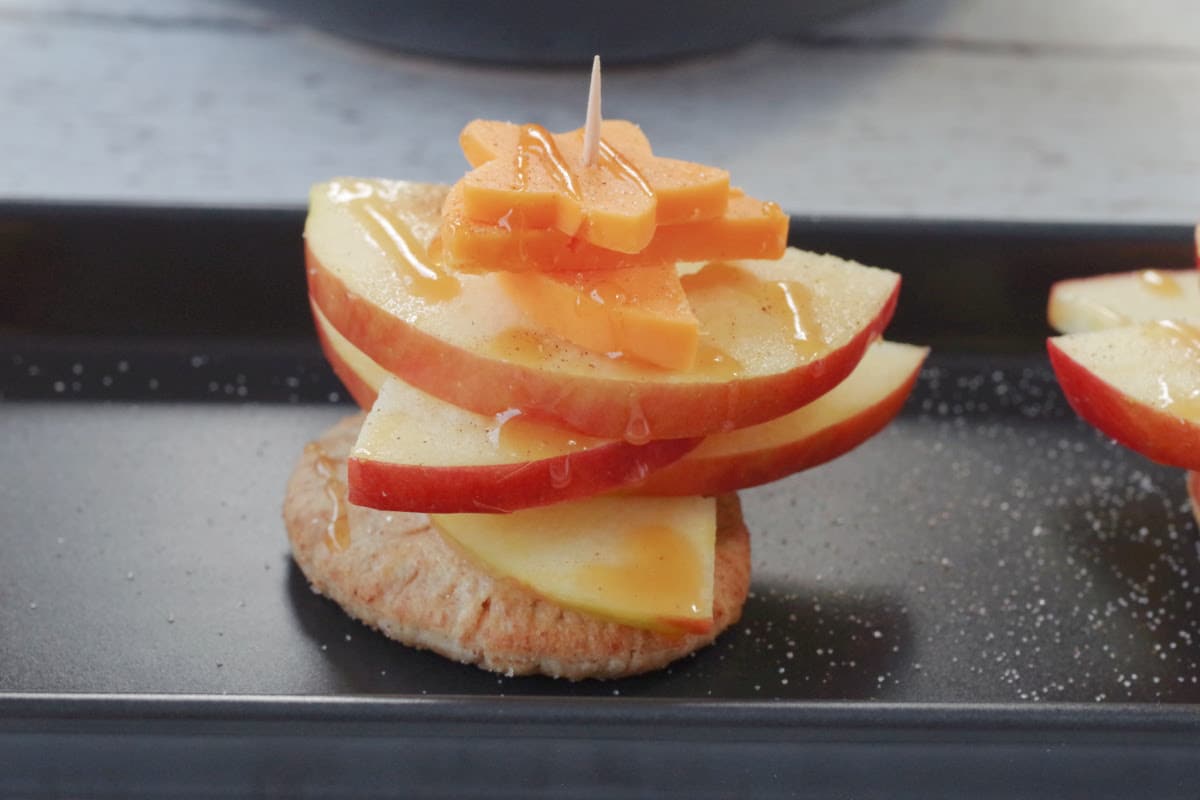 Do you ever want apple pie, but not the accompanying calories and fat? If you answered "YES!" then you're going to want to make these Healthy Apple Pie Bites! They are an easy sweet and savoury treat that is nutritious, yet tastes like apple pie! Baked mini whole wheat pitas are slathered in butter, cinnamon and sugar, topped with sliced Cosmic Crisp apples and cheddar cheese, drizzled with a caramel sundae sauce, then sprinkled with cinnamon sugar. I cut the apples and cheese into cosmic shapes like stars and moons to make this snack even more fun (if that's even possible.) 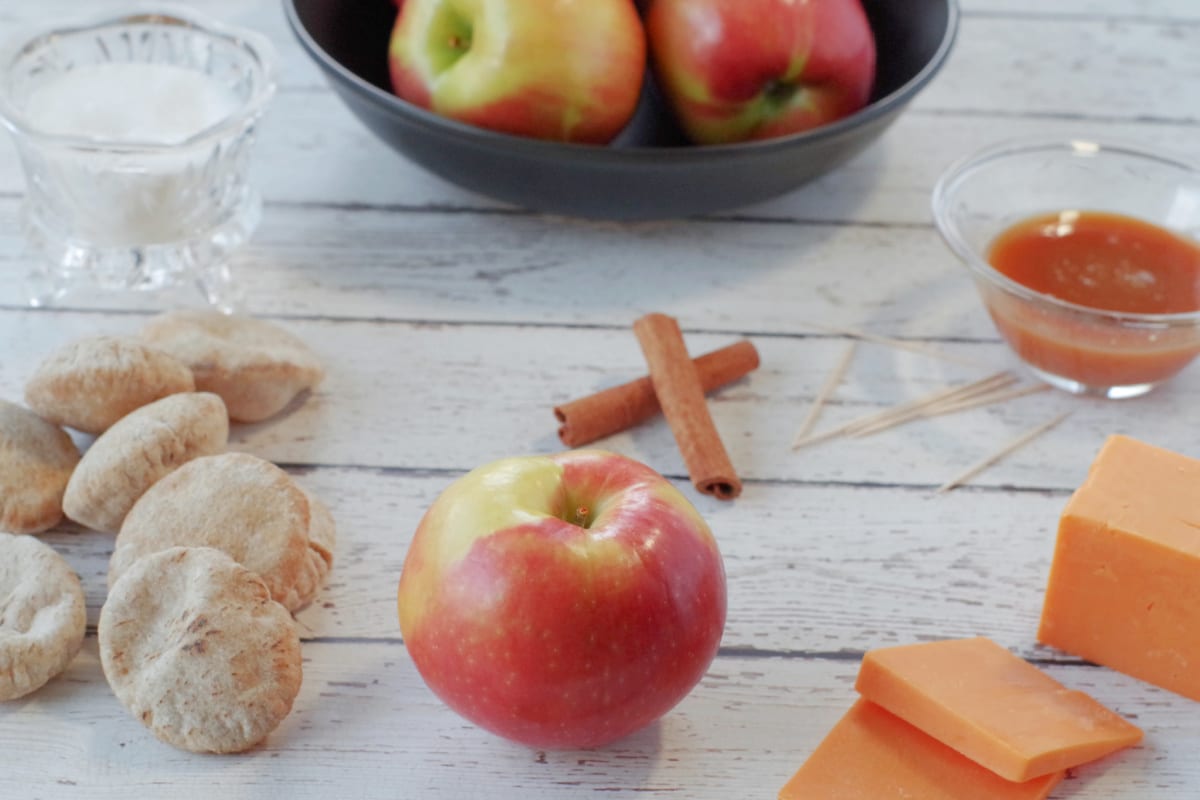 However, you don't even have to eat these apples as part of a recipe to enjoy them. If you've been following along with me for a while, you've heard me lament about my struggle with eating fruit. Well, Cosmic Crisps are on an entirely different playing field - I actually want to eat them straight up! However, Cosmic Crisp® apples aren't just for snacking, they are ideal for cooking and baking, due to their sweetness and crispy texture (be sure to check out my apple recipe ideas under the recipe card for more ways to cook with Cosmic Crisps!)

What’s the best way to store Cosmic Crisp apples so they stay fresh?

Cosmic Crisp apples are best stored at 32 °F (0 °C) in your refrigerator’s crisper. Place them in the crisper in a plastic bag with holes in it or cover the apples with a damp paper towel.

And if you're concerned about genetically modified food, you have no reason to worry! The Cosmic Crisp® was classically bred at Washington State University and is non-GMO. So, if you're looking for a healthy apple snack that tastes like apple pie (and who isn't?!) then give this a try! And for even more recipe ideas, be sure to visit Cosmiccrisp.com! 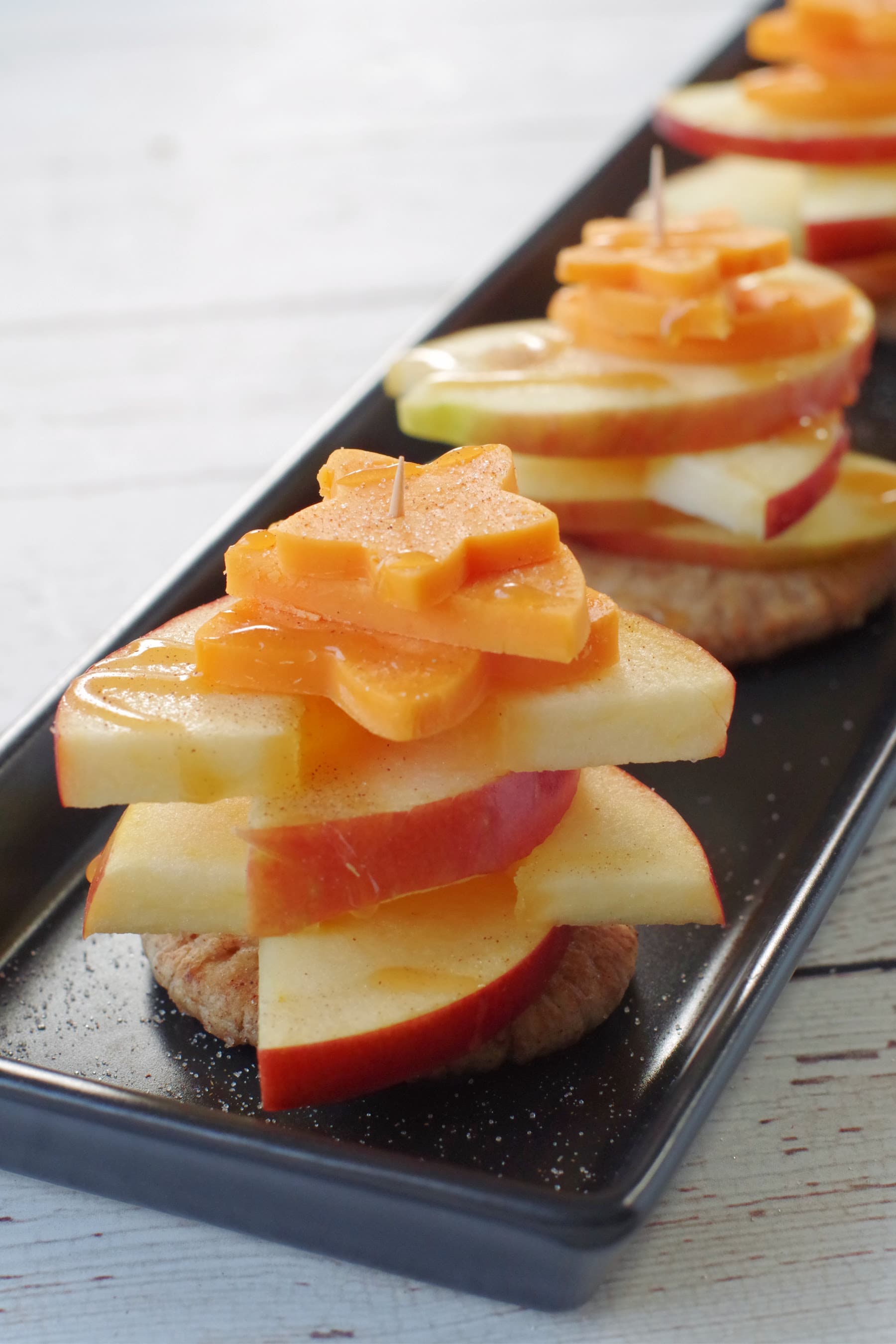 Where can I buy Cosmic Crisp apples in Canada?

Cosmic Crisp Washington State apples can now be found  across Canada, at most major retailers 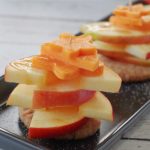