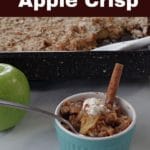 I often end up with a lot of apples that don't get eaten. Although they are purchased with the best intentions (and not always by me, ) I am not that much of a fruit gal. Honestly, I'd pick veggies over fruit any day. In fact, my trick to lose weight on Weight Watchers was to tell myself I could only eat fruit in the evening, if I was really that hungry. I was rarely that hungry....

But I hate to see food go to waste and eating apples in baking is an entirely different thing than eating them straight up. Wouldn't you agree? That's why I created this Weight Watchers friendly Apple Crisp! It's 6 WW points on my plan, but you can click HERE to see how many points it is on your plan!

Typically, apple crisp with oatmeal is 10 points on the blue plan, and although you may find some lower point apple crisp recipes out there, they generally contain artificial sweeteners. I don't use artificial sweeteners in my WW desserts, but I was still able to bring this down to 6 point on my plan, which is the same amount of points as the original apple crisp recipe in the 2009 edition of Weight Watchers magazine. I achieve that by using water as a filler and a little less sugar.

However, I use real butter because I still want to enjoy that taste. And since light butter isn't enough of a reduction in points to warrant replacing it, I stick with real butter. And trust me, it's worth the points! But it's the lemon zest and real light whipped cream that really makes this apple crisp sing (Dairyland and Gay Lea brands of light real whipped cream are both WW friendly)  It's the same combo of flavors I use in my apple pie but it's obviously a lot lighter!  Just try it and you'll see what I am talking about.

I've been following Weight Watchers for many years and my Mom followed it when I was a kid (long before artificial sweeteners became a thing) and that's what I always liked about it; it's normal, healthy eating. You can still lose weight without using artificial sweeteners. You just need to reduce sugar, fat and enjoy your desserts in moderation.

I would rather just take the hit for the points than use artificial sweeteners. They taste weird to me and I don't like how they make me feel (headaches and stomach aches etc..) I try to balance it out by eating low and zero (0) point foods like eggs, vegetables and meals like my Slow Cooker Mexican Chicken and my Weight Watchers Asian Sheet Pan Salmon, especially on the days when I'm going to be indulging in dessert.

💭Which Apples are best to use for Apple Crisp?

I prefer to use green granny smith apples for any kind of baking, as they hold their shape better (and don't turn to mush.) However,  you can use any apples you have on hand. The point is to use up your apples that would otherwise go bad. You can also cut this recipe in half if you don't have that many apples (See Serving Size)

An apple corer comes in very handy for this recipe!

You can cut this recipe in half if you don't have enough apples. Simply click on the number of servings in blue and change it (it would be 7 servings in this case) and the amounts will automatically adjust accordingly! You can also double or triple it!

This healthy oatmeal apple crisp is 6 WW points on my plan, but you can click HERE to see how many points it is on your plan!

If you're looking for additional Weight Watchers apple recipes, give my IHOP copycat Apple Cinnamon Topping  a try. It's another great way to use up lots of apples and it's 4 WW points on the blue plan! I make this often and mix it with fat-free Greek yogurt. Or I add it as a topping on pancakes (like my WW Friendly IHOP Harvest Grain & Nut (Copycat) and waffles. My kids love it too. In fact,  it's soo good, we even eat it straight up as a snack!

This Weight Watchers Apple Crisp has less points, but still has the delicious taste of real apple crisp. In fact, when I was writing this post and looking at the photos, it made me crave apple crisp so badly that I had to make some! But since I didn't have enough apples, I opted for a quick, Healthy WW Apple Crisp in a Mug!

So don't toss those apples and make this Weight Watchers friendly and healthy apple crisp instead! 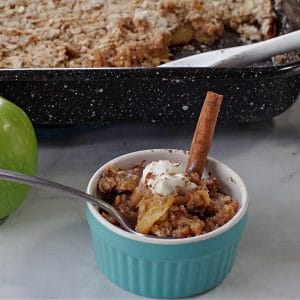 🔢WW Points
This healthy oatmeal apple crisp is 6 WW points on my plan, but you can click HERE to see how many points it is on your plan!
Mini Microwave Apple Crisp (in a mug)
If you're looking for a single serving, quick and easy ww friendly apple crisp, try my Microwave WW Apple Crisp in a Mug! 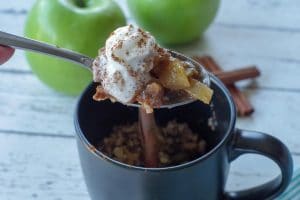 *NOTE: Dairyland and Gay Lea are both brands that are only 1 WW point on the blue plan for 4 tbsps 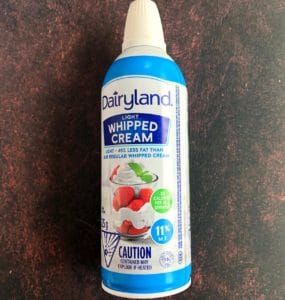