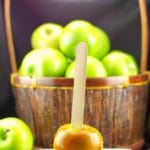 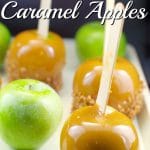 When I was growing up, "HALLOWEEN APP-LES!" was a familiar sing-song chant you would commonly hear reverberating through the chilly autumn air throughout my suburban Winnipeg neighbourhood on Halloween night. As we clamoured for candy at the doors of our benevolent neighbours,  "Halloween Apples" was shouted interchangeably with "Trick or Treat," in addition to the notorious,  "Trick or Treat,  smell my feet, give me something good to eat. Not to big, not to small, just the size of Montreal!" which we also used both daringly and sparingly, as we got a little older.

But like most things I said as a kid, I didn't think much of it; nor did I ever question the logic of it. And I was completely oblivious to its meaning. "Halloween Apples" was simply something we said.  I never expected to actually get an apple. Now, had I received one of these Salted Toffee Halloween Caramel Apples, that would have been just fine! These are very popular at during the fall season and perfect Halloween treat for a Halloween party!

Although they taste fancy, these Halloween apples are a quick and easy Caramel Apple recipe using store-bought caramels,  dipped in salted toffee bits.

Swirl the apple as you spoon the caramel over top. I found this was the most effective way of getting the caramel coating evenly on the apple.

I guess we just wanted to mix things up a bit. And I thought it pretty much translated to, "give me candy"  in sort of the same way, "trick or treat" did, but maybe with a "please" on the end. Like I said,  I didn't actually expect to get apples! And then when I did get apples, I never even made the connection. With Halloween upon us, I was reminiscing about Halloweens gone by and was curious as to where the saying, "Halloween Apples" came from? Is it a "Winnipeg thing"? 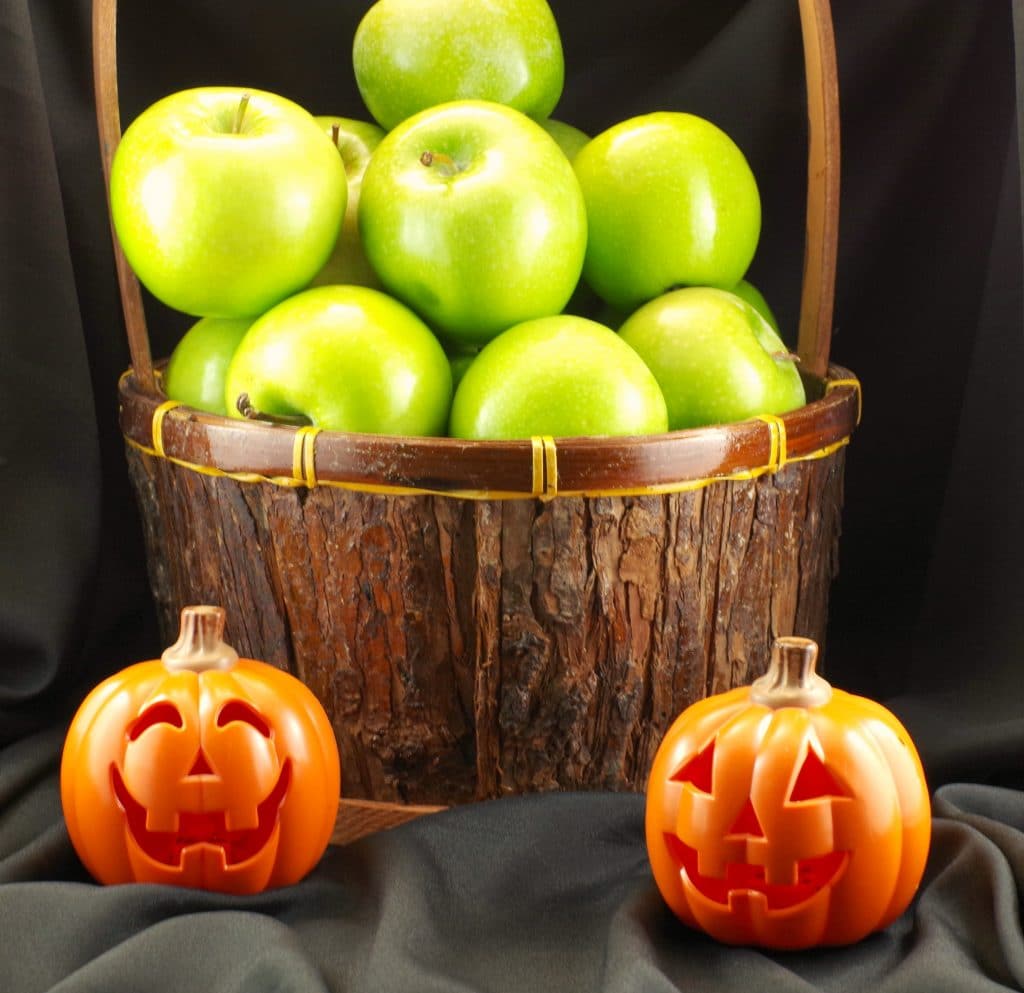 When you come from Winnipeg, you get accustomed to speaking a language that no one else in the rest of the country seems to comprehend. As an adult living in Western Canada, I can't tell you how many uncomfortable pauses and long, blank stares I have endured at dinner parties and the like when I've made reference to things such as "booters" that  I experienced as a kid growing up in Winnipeg. Although there are those that come from some 'eastern parts' of Saskatchewan that appear to understand the dialect of 'Peggers, as we are also commonly known, it's a stretch. So, I started doing my research and at first glance, "Halloween Apples" appeared to be predominantly a "Winnipeg thing".

Here are a few other popular "Winnipeg things" that you may or may not recognize, depending on where you are from (my beloved "booter" is included):

I started to wonder if we were the only ones that said, "Halloween Apples"?

According to Wikipedia, : "in some parts of Canada, children sometimes say "Halloween apples" instead of "trick or treat." This probably originated when the toffee apple was a popular type of candy. Apple-giving in much of Canada, however, has been taboo since the 1960s when stories (of almost certainly questionable authenticity) appeared of razors hidden inside Halloween apples; parents began to check over their children's "loot" for safety before allowing them to eat it."

I couldn't think of a worst waste of prime candy real estate in my trick or treating sack than apples! Not to mention the precious minutes and breath I had squandered at those apple-bestowing houses. Yeah, I know...apparently, I had asked for them! But fortunately for me, I trick or treated in the latter part of the '70's so the razor blade scare was still very real and therefore, at the very least, I could justify tossing those apples in the trash!

But had they been caramel apples... well, that's a completely different story! I would have been perfectly happy to get a caramel apple in my trick or treat sack. But alas, it never happened.

I also wondered what relationship caramel apples had to Halloween....

Caramel apples are said to have been invented in the 1950's by a guy named Dan Walker, who was a sales representative working for Kraft Foods at the time. Back then, Kraft sold small individually wrapped caramels, as they still do today. Walker said he was experimenting with melting down leftover caramels and made this brilliant discovery! Kraft continues to print the recipe for caramel apples on the backs of their caramel bags to this day. Then when October 31 was deemed caramel apple day (likely by Kraft, although I could not find the origin of this day) these apples became associated with Halloween! You can read read more about the origins of caramel apples HERE.

In light of this, I have made my own salted toffee version of the Kraft Caramel apple recipe. It's really easy to make but much less hassle than making the caramel coating from scratch. And melting down caramels tastes so much better and looks so much prettier than using the caramel apple wraps!

This Halloween apples recipe makes 5 apples because that was more than enough for our family. However, if you are making these for a group, you'll want to double, triple or even quadruple the recipe. You can easily do that by clicking on the blue servings number in the recipe card and selecting the number of servings you want. The ingredient amounts will then adjust accordingly.

You'll don't need a candy thermometer for this recipe. You'll need popsicle sticks (or lollipop sticks) and a baking sheet as well.

If you keep these delicious Caramel Apples in an airtight container in the fridge, they will last for 5 days.

It's a Canadian Prairie Thing.

In the end, I decided to conduct my own little "Halloween Apples straw poll" and randomly asked people I know if they had ever heard of this saying or if they said it themselves as kids.  Interestingly enough, I came across several individuals that said "Halloween Apples,"  on Halloween when they were growing up, although they were from cities and towns all over the Canadian prairies. Most had a Manitoba connection, but a few others claimed absolutely no known association with Manitoba. Not one person from Ontario and eastwards had ever even heard this saying.

Perhaps it's more of a Canadian prairie thing then, with some generational influence? Because I couldn't find anyone under the age of 40 that had the faintest idea as to what I was talking about either. Nor had my own kids or their friends ever heard of this Halloween saying. And for the 25 Halloweens I have been doling out candy in Calgary, I have never ever heard a kid say "Halloween Apples!" at my door.

However, if I ever were to hear a kid say "Halloween Apples!" again,  I don't think I could resist the temptation to bestow a caramel apple upon them. I happen to think they are an excellent use of prime trick or treating sack real estate!

So, if you're looking for homemade caramel apples, then you'll want to give these Salted Toffee Halloween Caramel Apples a try!

Did you say, "Halloween Apples"? when you were growing up? I'd love to hear your comments (below)!

If you're looking for Halloween apples and you love caramel apples, you'll love these Salted Toffee Caramel Apples! And you're probably also going to love my Caramel Apple Betty Dessert Shooters- it's a fun and festive fall dessert! 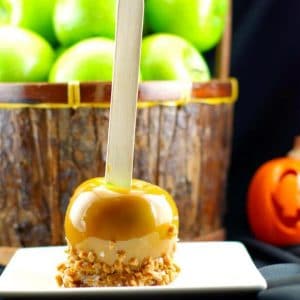