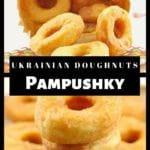 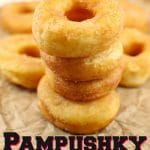 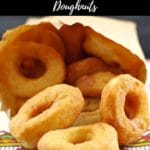 It's about 4:45 am and the alarm is wailing. Although I am typically an early bird, this is not something I particularly relish getting up for. Plus, it's my day off.

And it's also the first Friday the kids are off school for the summer, not to mention my first opportunity to sleep in. But instead of sleeping,  I will be racing to Confederation Park to catch a city bus downtown. Thankfully the blankets, sunscreen, rain coats and snacks are already packed and ready to go, including the little bags of those mini doughnuts, Ukrainian style (Pampushky).

The things we do for love...

It's the smell of the yeast that transports me right back to Baba's little kitchen. The pot is boiling on the kitchen stove while Baba hunches over the counter, working away, kneading the dough. These days that aroma is enough to make me weep. Back then it always meant she was making something magical and delicious, like these or Ukrainian bread (Babka  or Paska ).  But pampushky is definitely one of my favorite Ukrainian desserts, along with my Lemon Poppy Seed Torte.

We arrive downtown around 6:30 AM to secure a spot. My friends have done this for years so they have an actual system. I just follow along. We wait on the street corner near 9th Ave and 11 th St. SW with all our stuff in tow, for what seems like hours, until a city worker finally comes by and closes off the intersection. Then we pounce; procuring our hot and stinky chunk of prime parade real estate. And then we settle in for the 2 ish hour wait until the parade starts, while fervently trying to defend our land against invaders.

I have never been a big fan of the Stampede parade but my kids are. And if you're a kid in Calgary, you go to the Stampede parade. It's like a rite of passage in this town. I didn't grow up here so it doesn't have the same memories or meaning for me that it does for them. But there were a few years when they were very little that I couldn't get the time off work and wasn't able to take them, so I suck it up, as I am making up for lost time.

These mini Ukrainian Doughnuts became a tradition for us when we started going to the Stampede parade. I don't fill my Pampushky because my Baba never did and to me, that would just be sacrilege. She would however, sprinkle them with sugar, so this is what I do, except that I add a little cinnamon. It's divine! These donuts are so light, fluffy you will never go back to whatever doughnut it is you used to make. I have also made these donuts for bake sales and they were a huge hit!

For this recipe, you'll need:

I would recommend you use a deep fryer for this recipe, as cooking in a pot of oil on the stove is not as safe. Although my Baba did it that way, I do NOT recommend it. However, if you choose to do it that way, see NOTES for instructions. I have also listed my Amazon deep fryer recommendations (affiliate links) in the NOTES.

You'll need a mini  (2 ½ inch) donut cutter (affiliate link). However, if you only have a large donut cutter, you could simply make larger donuts.

This recipe makes a CRAZY amount of donuts (88 was my count) so you can either cut it in half and make it all, then freeze the extra donuts . Or you can freeze half of the dough.

My kids no longer want to go to the parade and although it's a little sad that they are growing up, I'm grateful that I no longer have to do this. But it's still Stampede week in Calgary and in my house, that means one thing - homemade mini doughnuts! The tradition has lived on. Food traditions tend to survive in my house.

And although they take a lot of time to make, I love these donuts so much that it's not a sacrifice for me to make them every year. I have tried making other homemade doughnuts that are quicker or a little healthier (baked), but they just don't cut it. These traditional donuts may take you a good couple of hours, but trust me, this is an easy recipe and well worth your time and effort!

So, if you're looking for Ukrainian desserts, you'll love this pampushky recipe! 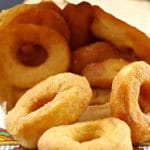 This Pampushky (Ukrainian Doughnut) recipe is a light and airy raised doughnut without filling. These traditional Ukrainian donuts are made into modern mini (Stampede-style) doughnuts and sprinkled with cinnamon and sugar just the way my Baba used to make them when I was a kid.
Course Dessert, Snack
Cuisine Ukrainian
Keyword donuts, doughnuts, pampushky
Prep Time 1 hour 30 minutes
Cook Time 30 minutes
Total Time 2 hours
Servings 88 doughnuts
Calories 164kcal
Author Adapted from "From Baba with Love" cookbook, pg. 136
Prevent your screen from going dark

👪 Serving size This recipe makes a CRAZY amount of donuts (88 was my count) so you can either cut it in half and freeze half of the recipe. The dough will freeze well for up to 4 months.  🌡️Storing Storing: I store these in a sealed container on the counter for up to 3 days. They do not need refrigeration. Freezing: The cooked doughnuts freeze well for up to 4 months in Ziplock freezer bags or sealed containers. The dough also freezes well for up to 4 months as well. I freeze it in a Ziplock freezer bag. However, you need to make sure it is completely defrosted before you work with it.   💭NO deep fryer method You can use a deep pot to fry the doughnuts in but I do NOT recommend this. Hot oil can be dangerous. But if you are going to use this method: My Amazon Recommendations (affiliate links)