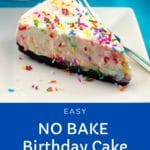 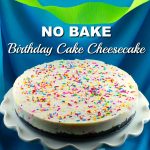 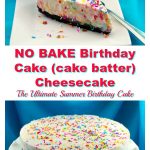 It's best not to plan an outdoor birthday party when your birthday falls in the middle of January and you live in Winnipeg, Manitoba, Canada. But I did it anyway. I was 10 years old.

Then I spent the next several weeks praying it would be warm enough to have the party.... I was so jealous of the summer birthday kids.  Not only did they get sunny, warm outdoor parties, they never had to go to school on their birthdays.

I really hoped that my own children would have summer birthdays and fortunately they did- one in July and the other in August. But summer birthdays come with their own set of complications, like not wanting to turn on the oven to bake a birthday cake because it's too hot! So, in light of this, I've had to come up with workarounds, like this No Bake Easy Birthday Cheesecake.

I always ask my kids what kind of cake they want for their birthday and this year I found out that my daughter loves cheesecake and that my No Bake Rhubarb Cheesecake  is her favorite! I actually did not know this. She said wanted a cheesecake for her birthday, so I started to toss around cheesecake birthday cake ideas. But to my mind, since it's a birthday cake, I thought it needed to taste like a birthday cake. 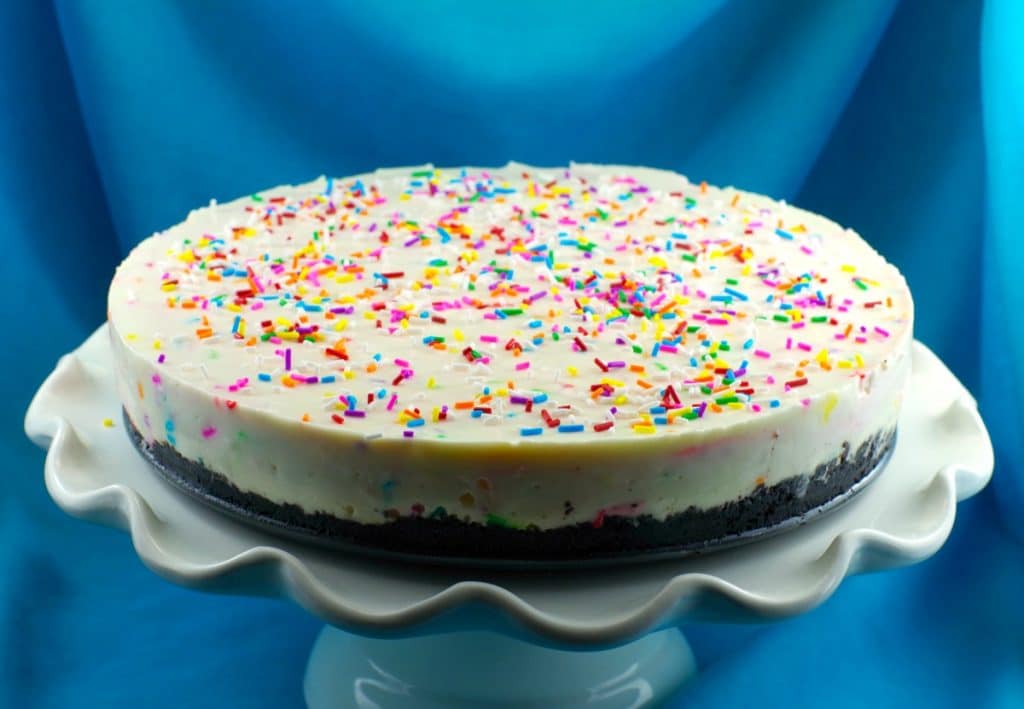 Enter cake batter flavor cheesecake! The taste of birthday cake is so distinct and it's magic cannot be underestimated when it comes to celebrating a birthday. Lots of sprinkles make it even more festive and birthday-like! So,  when I couldn't find the type of cake batter flavored cheesecake I was looking for online, I decided to create one that would be exactly she wanted! So, if you are looking for birthday cheesecake ideas, give this Cheesecake Birthday Cake a try!

My own birthday has fallen on  "Blue Monday" more times than I care to remember. Supposedly, Blue Monday is the day in which the stars align to create the most depressing day of the year (the 3rd Monday in January). And even more depressing, if you're a kid with a birthday in the middle of January, is that you have an 80% chance of having to go to school that day 🙁

After I planned my outdoor tobogganing party, I spent several hours meticulously designing and individually coloring each of the party invites. Then, sadly, I had to cancel my party because the temperature outside was -50 degrees Celsius that day. Yes, you read that right MINUS 50! That made for one pretty depressed kid. 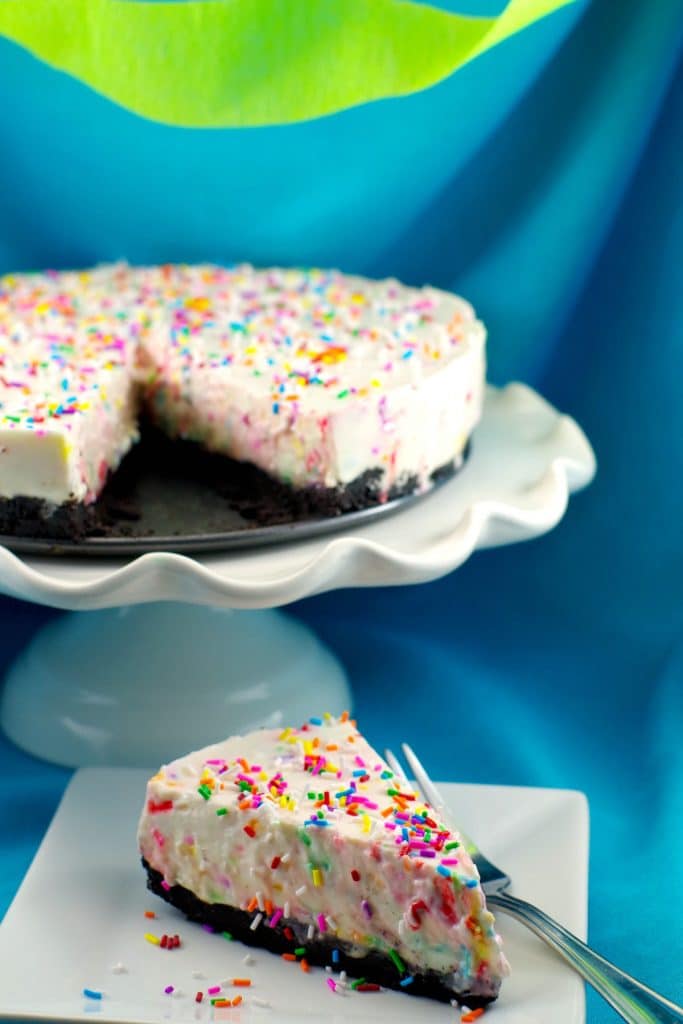 Because having a birthday in January is depressing enough, when I grew up and started working a job, I decided I'd take the day off work for my birthday whenever I could. This really helped.

But if there is one saving grace about birthday celebrations in January in Canada, it's that you will never have to worry about it being too hot to turn on the oven and bake a cake! But if you want to make a no bake birthday cake, this Birthday Cake Cheesecake, with all those colorful rainbow sprinkles, is sure to cheer up any birthday girl, even if her birthday falls on Blue Monday!

And this Red Velvet Ice Cream Cake is sure to be a hit for any summer birthday!

This Easy No Bake Cheesecake Birthday Cake tastes exactly like a birthday cake, but with the delicious, creamy and tangy cheesecake flavor and texture! With sprinkles on the inside and outside and an Oreo cookie crust, it's the perfect summer birthday cake (that you don't even have to turn on your oven for). And it's the perfect cheesecake lover's birthday cake. * 13 Weight Watchers blue points per piece and worth every single point!
Course Dessert
Cuisine American, North American
Keyword birthday cake, cake batter, cheesecake
Prep Time 30 minutes
resting time 3 hours
Total Time 3 hours 30 minutes
Servings 16 slices
Calories 259kcal
Author Terri Gilson
Prevent your screen from going dark