I think that summer saw the most rain we had the entire time I lived in Winnipeg. And as I watched the rain pouring down yet another day, I was  only filled with dread.  At that point, more rain meant one thing -long hours of hard labour. 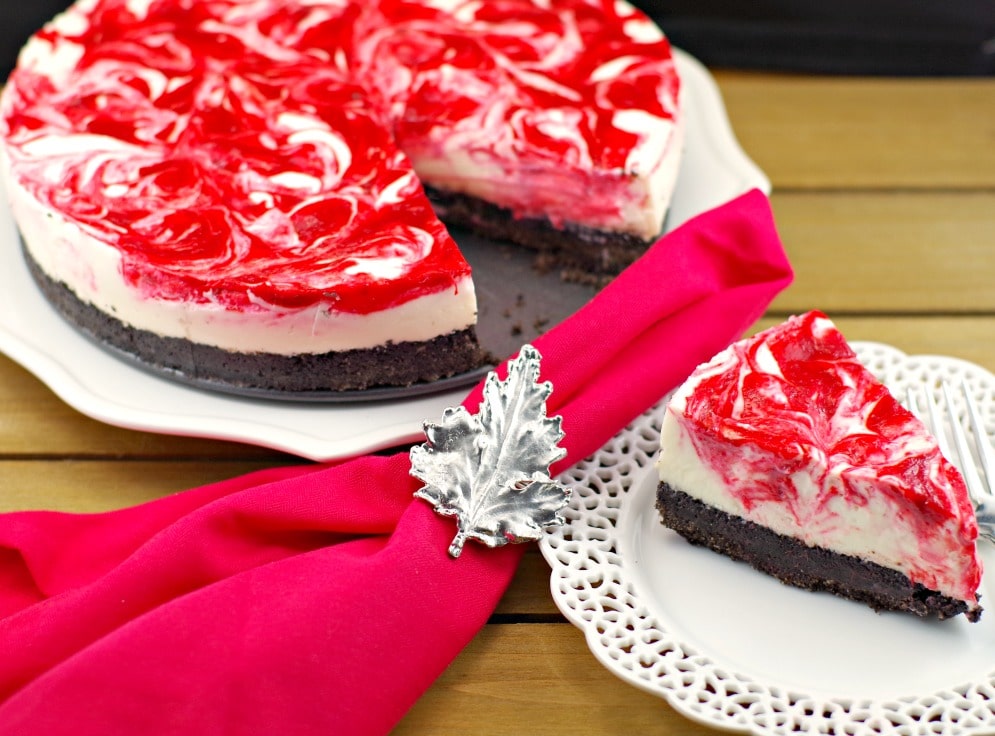 I come from a long line of green thumbs and so badly wanted to be one myself. So, when my in-laws had mentioned they needed someone to look after their garden because they were going away for a month, I had jumped at the chance. It would be fun! I could finally be the gardener I'd always dreamed of becoming.

My Baba, Grandma and aunt all had beautiful gardens, where they always seemed so happy and content. My Mom wasn't really much a gardener, that is, until she retired. But she still grew rhubarb back in the day. They all did. In fact, pretty much everyone in Manitoba had a patch of rhubarb in the 1970's, whether they wanted one or not.

Rhubarb…what Canadian doesn’t have many fond childhood memories of that simple summer day treat; pulling rhubarb from the garden, washing it off with the garden hose and dipping it in some sugar?!

...along with your taste buds! 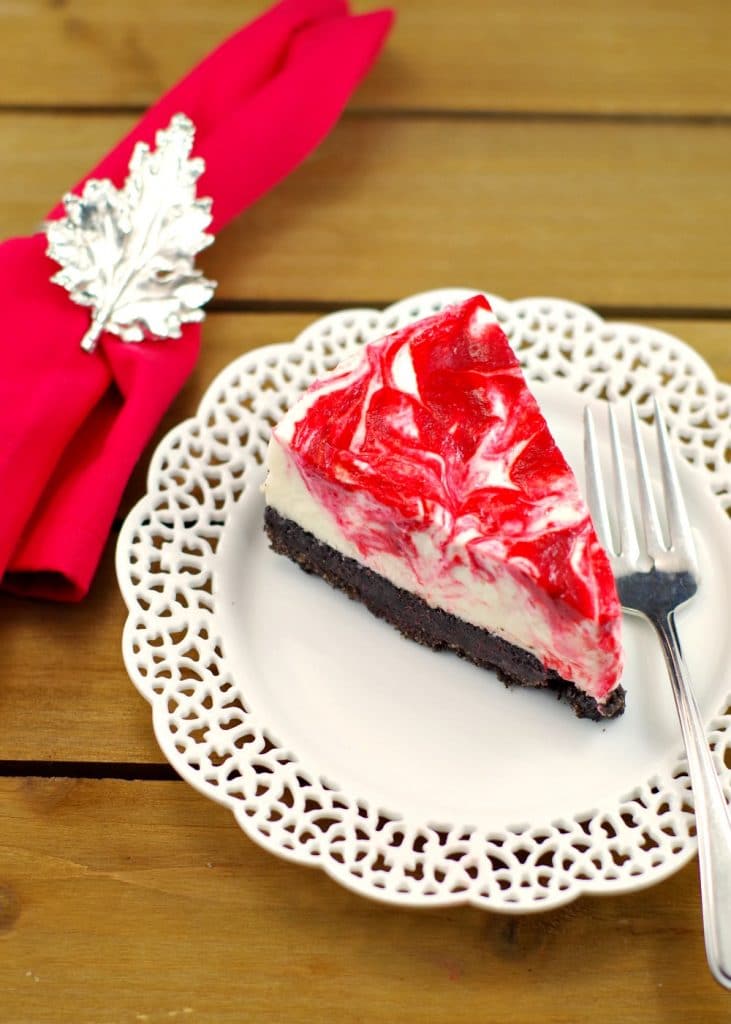 This quintessential Canadian no bake low-fat rhubarb cheesecake recipe is not only red & white, it's a lighter version, boasting a dark chocolate Oreo cookie crust with a red rhubarb and strawberry marble and creamy white chocolate filling. Fennel gives it a unique and delicious hint of licorice. And all of this without even turning on your oven!

But as the scorching Manitoba sun beat down upon me, while I spent a boiling hot and humid summer month doing endless hours of back-breaking field labour, hoeing and weeding and weeding some more, I seriously regretted my enthusiasm to become a gardener. So much so that I stayed away from gardens for a long time after that.

I dodged a gardening bullet

However, when we bought our own house many years later, I thought I'd give it another go. We had a small flower garden in the front and I planned to put more garden in the back. That was 14 years ago and I still haven't added more garden in the back of my house. And you know what? I'm glad I dodged that bullet. Kids came and life got insanely busy and I realized that even finding time to weed that little one in the front was more than enough for me. Now I see why my Mom waited until retirement.

And although I have toyed with the idea of planting some rhubarb (because it was so hard to get my hands on it for a long  time) I still haven't been able to bring myself to do it. Gardening anything is hard work!  Discovering I could buy frozen rhubarb at Co-op made growing my own rhubarb even less attractive. And now I have a friend that lives nearby, has a big rhubarb patch and wants to part with it. Talk about a win-win situation! 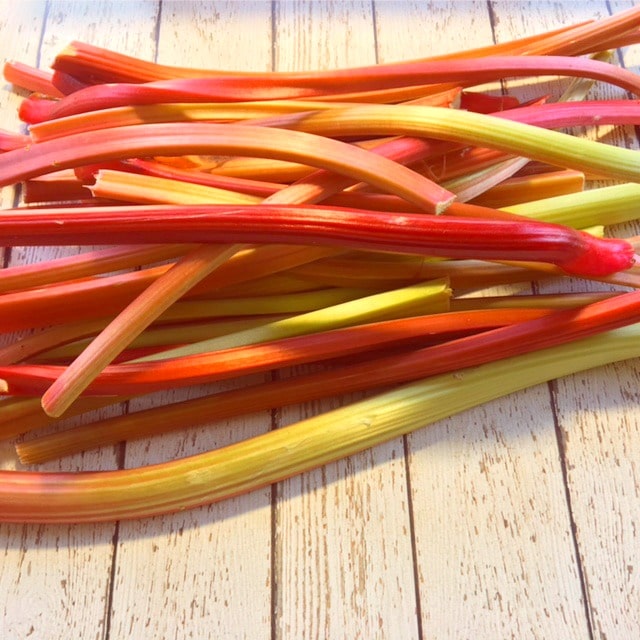 This no bake rhubarb cheesecake can be made with fresh or frozen rhubarb so it doesn't matter whether you grow rhubarb.  And it is the perfect Canadian dessert for your Canada Day celebration or your next summer potluck! 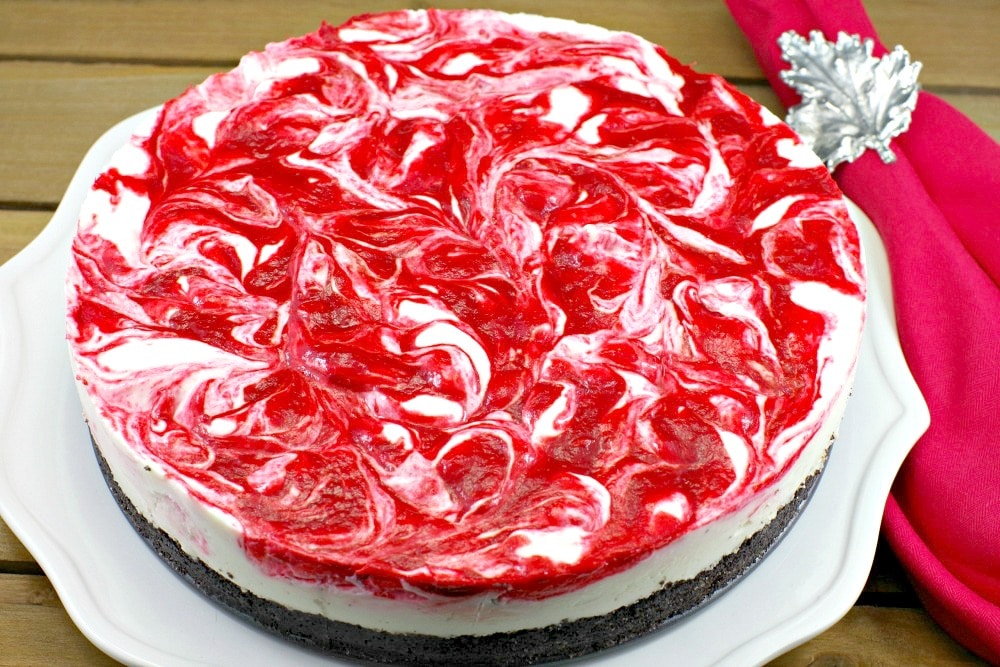 I have never felt the same level of dread that I felt all those years ago as I watched that rain pour down,  acutely aware that weeds were growing at a super sonic rate and it would be my job to dispose of them.  And I hope to never have that feeling again.

So, for me, I think gardening is best left to retirement or at least until my rhubarb supply dries up. In the meantime, I will stick with taking rhubarb off the hands of my friends that are willing to part with it.

If you love Cheesecake, then give my Light Pumpkin Cheesecake a try! 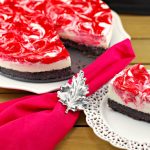 This quintessential Canadian no bake light rhubarb cheesecake is not only red & white and low-fat, it boasts a dark chocolate Oreo cookie crust, coupled with a rich, creamy white chocolate and red rhubarb strawberry marble filling Fennel gives it a unique and subtle hint of licorice. And all of this in 30 minutes and without even turning on your oven!
Course Dessert
Cuisine North American
Keyword cheesecake, no bake, rhubarb
Prep Time 30 minutes
Total Time 30 minutes
Servings 16 slices
Calories 248kcal
Author Terri Gilson
Prevent your screen from going dark

*The food coloring is optional, but it gives the cake a bright red colour. If you use the 'super red' you use less. If you buy regular red, be sure it's 'no taste' red