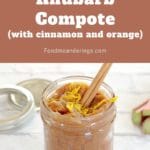 Rhubarb season is here and I'm even more excited than ever because I started growing my very own rhubarb this year! And one of the things I love to make with rhubarb is compote. Rhubarb Compote is easy to make and goes so well with many things like Greek yogurt, ice cream, oatmeal, toast, pancakes, waffles, oatmeal, parfaits, rhubarb lemonade, and much more!

There are a lot of recipes for rhubarb compote out there, but my recipe is unique because it's made with orange and cinnamon. I've been making it this way for years and this is the way I remember my Baba making it. But why is it a brownish color, you're wondering? You're probably used to seeing pink rhubarb recipes (see FAQ's to find out why)

I totally love rhubarb and grew up with it in abundance in Manitoba. It was everywhere; in my yard, all my friends' yards, Baba's yard, my Grandma's farm, in ditches, fields etc.. It grew just about anywhere. Heck you could even mow it down (like the haters often did) and it would come back with a vengeance (YAY rhubarb!) As kids, for a snack, we'd snap the rhubarb at the stem, hose it off and dip it in sugar. Yum! And not only do I still do that, I've got my kids hooked on it too!

This is my first rhubarb plant that came up this year (thanks to my lovely friend and colleague Nowel for giving it to me) ! I wish I had started growing this years ago....Oh and also thanks to my other lovely friend, Nadya, for supplying me with rhubarb for years before this!

💡Rhubarb is a vegetable?

Rhubarb is actually a vegetable but it's most commonly sweetened and served as a fruit. And interestingly enough, according to this Huffington Post article, it's legally a fruit. It 1947 it was declared a fruit in a New York court because it's most often cooked as one in the United States (and because it was a way to save businesses who imported rhubarb from spending additional money on taxes).

For this rhubarb compote, you'll need:

Rhubarb fool and Rhubarb Cakes are probably the most common recipes with rhubarb compote. As I mentioned, it's also a great topping on oatmeal, pancakes, plain yogurt, frozen yogurt, trifle, pavlova, rhubarb lemonade and many more dishes! Some people enjoy rhubarb compote on grilled meats like pork. Personally,  I just love it on Greek yogurt!

However, because I did not have my own fresh rhubarb yet,  I made this rhubarb compote recipe with rhubarb I'd received from my friend, Nadya. And it had actually been in my freezer from last spring. You can easily freeze fresh rhubarb, but just be sure to wash it and chop it up first. I freeze it in a freezer bag. Then put it over a sieve to drain off the excess moisture as it thaws. And although it gets a little soggy when defrosted, if you're just making compote or baking with it, it doesn't really matter.

This rhubarb compote recipe makes 16 servings However, you can half, double or triple the recipe by clicking on the blue serving number and selecting the number of servings you'd like. The ingredient quantities will automatically adjust.

A serving (2 tbsp) is 3 WW points on my plan. Plug the recipe into the recipe builder on your app to see how much they are on your plan.

You'll need a good knife, a cutting board and a large saucepan (affiliate links) for this recipe.

Store this rhubarb compote in an airtight container for up to 5 days in the fridge. It can be frozen for up to 3 months in a sealed container.

If you have leftover rhubarb compote (fresh or frozen), you'll want to try my 2 ingredient Rhubarb Lemonade!

Why is my cooked rhubarb brown?

The reason cooked rhubarb turns brown mostly has to do with the variety and the way it's cooked. The Strawberry rhubarb variety will look pinker when cooked but it's not a common variety and harder to find. Roasting rhubarb can also help rhubarb preserve a pinker color. So if you are looking for the pink color, I recommend you roast it. You can also add a little red food coloring. Your cookware can also affect the color of your cooked rhubarb. Because rhubarb is acidic, if you cook it in a metal pan like copper, aluminum, the rhubarb will turn brown. But in most cases, it's simply the variety and stove top cooking method that causes it to turn a brownish color.

Can I freeze Rhubarb Compote?

Yes you can freeze rhubarb compote as well as fresh rhubarb! Freeze it in an airtight container or Ziplock freezer bag. It will last a few months in the freezer and taste as fresh and delicious as ever!

Did you make this recipe? Please RATE THE RECIPE below and leave a comment! 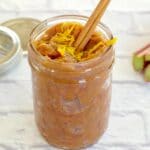