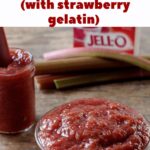 If you are lucky enough to have an abundance of rhubarb, stewed rhubarb is a great way to make the most of it! This recipe uses strawberry gelatin for a rich color and a tasty result (like stewed rhubarb and strawberries, but easier). I add cinnamon, vanilla and orange for a complex depth of flavor like no other stewed rhubarb!

This stewed rhubarb with gelatin recipe is especially popular in the spring during rhubarb season (April - June) and was inspired by my rhubarb compote on this site. Although stewed rhubarb and rhubarb compote are the same thing, because this one has a strawberry flavor it's perfect for making my 2 Ingredient Rhubarb Lemonade (shown below). I highly recommend you try it if your are making stewed rhubarb/compote or have leftover stewed rhubarb.

The varieties of rhubarb that typically grow around here produce a brown compote. And since the first rhubarb harvest of the season often yields the reddest rhubarb, with subsequent harvests often yielding less red rhubarb, this recipe is perfect for later spring and summer rhubarb harvests.

Adding strawberry gelatin thickens up the rhubarb compote without having to add cornstarch. It also intensifies the flavor and color.

How to make Stewed Rhubarb:

Cook the rhubarb, water, white granulated sugar, orange juice, vanilla, orange zest, lemon juice and cinnamon in a large saucepan (with lid) over medium heat until it comes to a boil. Turn heat down to low, and let rhubarb mixture simmer for about 20 minutes, or until rhubarb is tender and broken down, stirring occasionally.

Stir until completely dissolved and remove from heat. Allow to cool completely before serving.

This recipe for cooked rhubarb makes 24 (¼ cup) servings. However, you can half, double or triple the recipe by clicking on the blue serving number and selecting the number of servings you'd like. The ingredient quantities will automatically adjust.

🥗 What to do with Stewed Rhubarb

Although rhubarb is technically a vegetable, you can put stewed rhubarb on anything you'd put a fruit compote on, such as yogurt (shown below), ice cream, cake, overnight oats, pancakes, waffles, grilled meats and even in Rhubarb Lemonade (see photo above) or smoothies!

I also love making frozen yogurt cups by adding 1 part stewed rhubarb and 2 parts plain non-fat Greek yogurt (adjust to your taste) and freezing them in muffin liners for at least 6 hours. They are a delicious little frozen treat!

You will need a large saucepan (affiliate link), a good knife and cutting board for making this stewed rhubarb sauce.

Store this recipe for up to 5 days in a seal container in the fridge. It freezes well in an airtight container for up to 3 months.

Are stewed rhubarb and rhubarb compote the same?

Do you have to peel rhubarb before stewing?

No, you do not have to peel rhubarb before stewing, as it breaks down while cooking.

So, if you're looking for a delicious, beautiful and easy stewed rhubarb recipe, give this one a try! 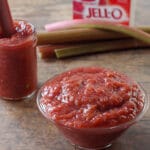