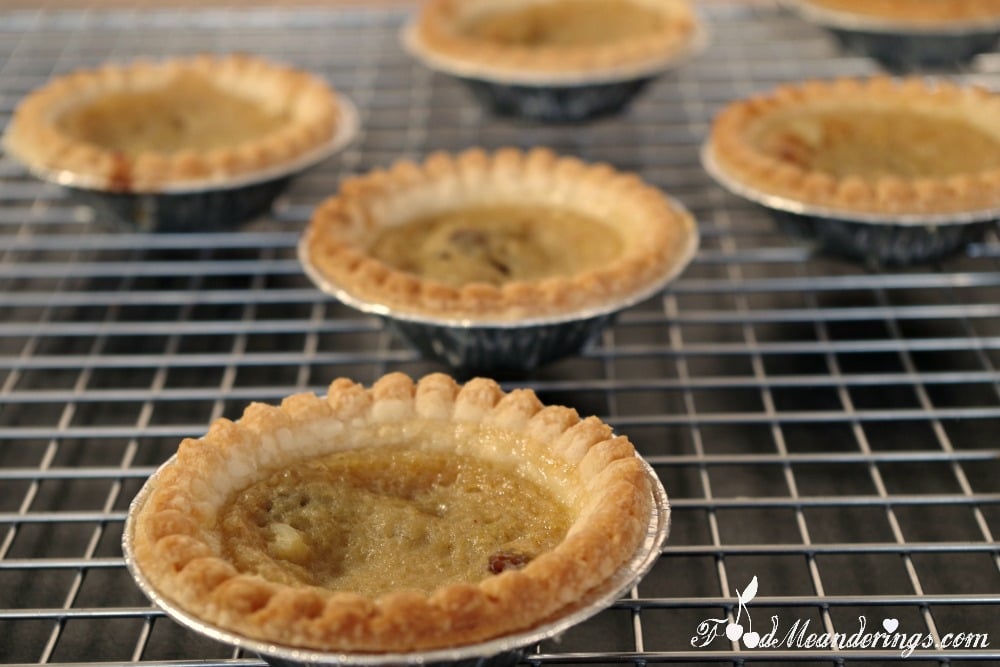 Why Baking is next to Godliness

I think it all started with the butter tarts. It was my habit to snatch a few from the colossal Tupperware container on Grandma’s kitchen counter as I headed out into the farmyard, the dog trailing close behind, lapping up the renegade flakes of her buttery cold water pastry. With each bite, crumbs cascading like feathers, I’d cup my hands in a desperate attempt to contain their elusive and capricious nature, endeavoring to save them all for myself. The burst of gooey caramel goodness that ensued, like a syrupy electrical surge, rendering me starry-eyed, yearning for more, yet sated in my need for comfort and security, was my sustenance on many a chilly autumn day as I explored that little corner of the world.

A love affair with baking

I came by my love of baking honestly. Both my grandmothers were exceptional bakers. My maternal Grandma’s glorious butter tarts were just one of her many specialties that I have not only savored over the years, but also held in the highest esteem. It always amazed me that they started out as just a few staple items from her pantry, and by the simple act of adding heat, morphed into something so exquisite.

My Mom didn’t share the baking love. It’s not that my Mom couldn’t bake, she just didn’t want to. She said it was because she would just eat it and didn’t need the calories. As a young girl, many a weekend would be spent out at my Grandparents farm in southwestern Manitoba, where I would incessantly pester my Mom to make black forest cake with me. It was her favorite, so notwithstanding the calories, I reasoned it was all the easier to entice her with.

It’s not that I loved to bake with her either. It really wasn’t that much fun, mostly because she didn’t seem to enjoy it and would be irritated by the mess it created (although other messes didn’t seem to faze her). It was just that I needed her. I needed her permission, her guidance and her navigation of that unfamiliar farmhouse kitchen with its enigmatic configuration and foreign control knobs. Each time I asked her to bake and she responded with her notoriously off-handed, “let’s not and say we did”, I died a little inside.

You see, I didn’t want to bake that cake simply because I was 9 years old and loved eating cake with abandon and without the remorse that accompanies middle age, I wanted to bake that cake because it represented something grander. It represented creation. Out of those modest morsels of sugar, flour, eggs and oil erupted a form so magically extraordinary, so rich in its depths of chocolate decadence, so remarkable in its conception, that I was left in complete awe. Even if it was only a Betty Crocker cake mix.

Baking was the complete antithesis of a succession of other disappointing experimental childhood concoctions. The sea monkey experience is a prime example. The package they came in held the promise of a darling little family of sea creatures that never did emerge from that worthless mixture of brine shrimp fragments and warm water. In the end, left only with the floating, soggy remnants of what could have been, I felt barren. But baking always resulted in a transformation, whether or not the outcome was what I anticipated. Baking was my restitution for those lives - the ones I never got to create.

I have baked for a good many years now, gradually honing my skills while graduating from Betty Crocker cake mixes to experimenting and developing my own recipes. Although I have had my share of baking disasters (especially in my early years of experimentation),  as my baking skills have evolved, I have come to better understand the basic formulas required for various baked goods; the approximate ratios of liquid to dry, amount and type of fat, leaveners and so on. But I continue to have my failures. As is in nature, nothing is promised- survival is not guaranteed.

The thrill of experimental baking is that you truly don’t know what will happen until the timer goes off.  The warm cocoon of the oven ignites a chemical reaction that in turn, spawns an entirely new entity – nothing like the state it began in. I believe this is also where baking and cooking diverge. With baking, you cannot rely solely on tasting along the way. To some extent, you have to put your faith in a higher power.

These days, not only am I on a crusade to make the best damn black forest cake around (minus the box), I am also the one baking my Grandma’s butter tarts. And even now, when the gastronomical pleasure emitted by that tart meets my tongue, invoking the sort of unabashed bliss that only comfort food can, I am instantly transported back to that ever so enchanted era of my childhood, unburdened by adult anxiety, virtually able to taste the implicit freedom and carefree wanderings of my 9 year old self. While my capacity to consume so many of those magical butter tarts has waned ever so slightly, my pleasure for baking them has not. Nor has my wonderment at the mystical metamorphosis that inevitably occurs between counter top and cooling rack.