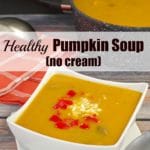 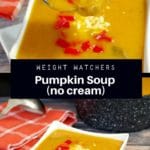 It's become a tradition - something we do every year. We buy a pumpkin, cook it up, bag it and stock the freezer with it. Then my husband makes his amazing Healthy Pumpkin Soup (no cream)! But this year we almost didn't get a pumpkin...

I also followed him around the kitchen while he cooked this year, measuring ingredients, capturing the process and writing it all down because not only do I want my kids to have this recipe, but also future generations. And it's too good not to be shared with the rest of the world!

Weight Watchers friendly @ only 5 WW points on the blue plan,  per 1.5 cup serving (with BACON!) this is the best ever Weight Watchers Pumpkin Soup! And although it has no cream, it's rich and creamy. This is because all the ingredients are pureed once it's cooked, making it a super light and healthy and really WW friendly meal.

I'm generally not fond of savory pumpkin things, but this pumpkin soup is an exception because it's unlike any pumpkin soup I'd ever had. I really is the best pumpkin soup recipe ever! It's that good! Made with bacon and mushrooms and no cream, this pumpkin soup tastes gourmet but is actually Weight Watchers friendly! You will also need: 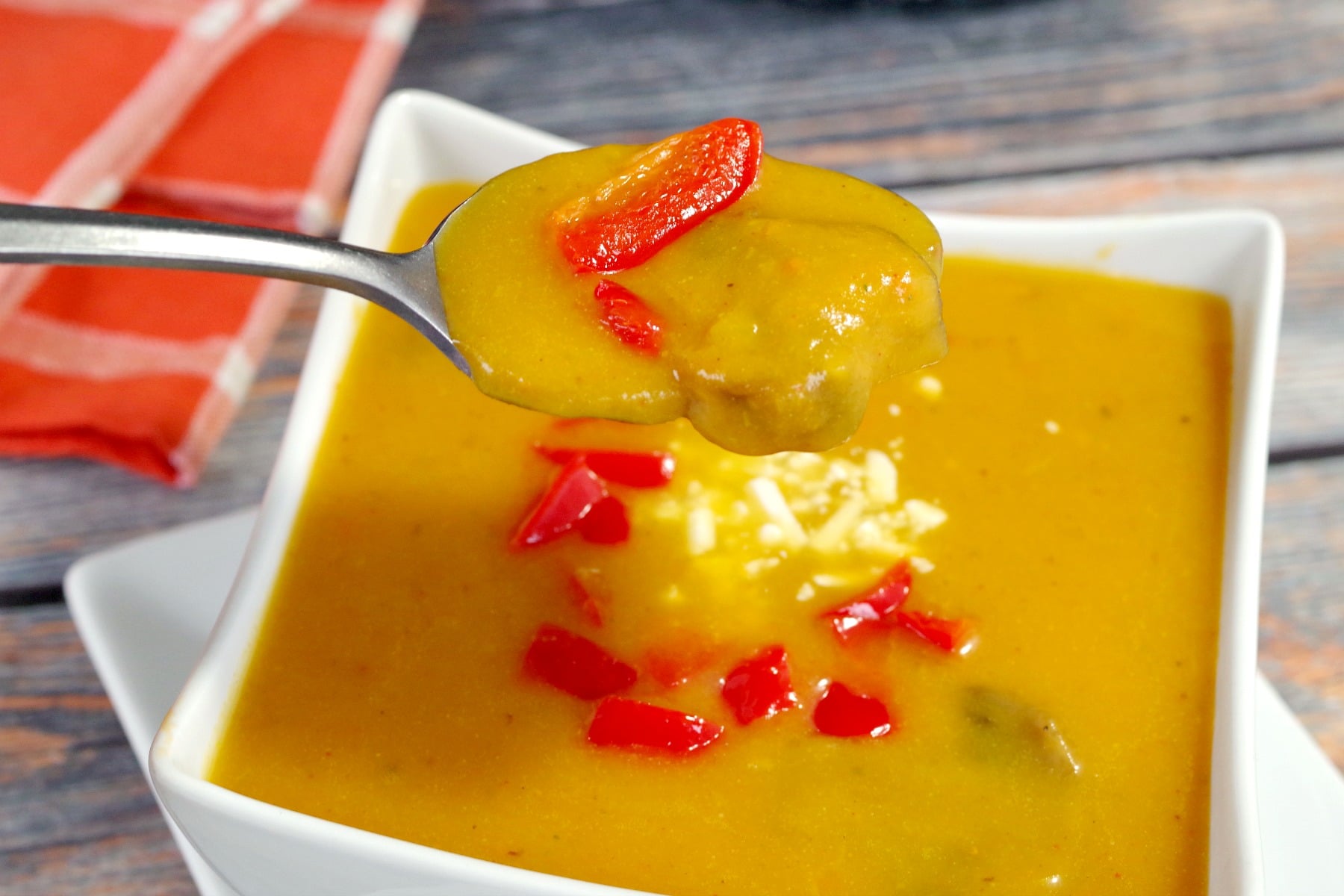 Years ago,  I worked at a restaurant where everyone raved about the stuffed potatoes. And when I finally decided to see what all the fuss was about, I was sorely disappointed. In fact, I thought they were horrible! They had this foreign flavor - something that was not meant to be with potatoes. Nutmeg. And although many won't agree with me,  I think that nutmeg should stay out of the savory culinary world. And I figured out that's why I never liked savory pumpkin things; most of them were made with nutmeg! My husband leaves the nutmeg out for me. Lucky me! And hey,  I'm not saying you can't add a pinch of it if you like, but trust me,  you really don't need to.

I consider this a gourmet pumpkin soup  because not only is it outstanding, it's pretty involved. What I am saying is that this is not your make after work dinner soup; there is a time investment. But I guarantee you - your taste buds will be rewarded with amazing gourmet flavor.

My husband enjoys making soup - he finds it therapeutic after a busy week at work. And he is damn good at it! He learned a lot working as a cook, including some useful soup making tips from some talented chefs he had the opportunity to work with and learn from. And the taste of this soup is testimony to that.

However, I don't think this is necessary. We ALWAYS buy the exact same type of pumpkin as we would for carving jack o' lanterns (from the big bin outside the grocery store) and they always taste amazing! The key is that you puree the heck out of it before you bag it or it's too stringy! And then you drain off as much water as you can. Personally,  I'm not going to pay a lot more money for a cooking pumpkin (and get something a lot smaller), but the choice is yours. You can also use canned pumpkin for this recipe, but it's not going to be nearly as good. See NOTES for video on how to cook a pumpkin.

And as I mentioned, we were lucky to get a pumpkin at all this year because there was a shortage!  Our early winter weather caused most of the pumpkin crop to rot in the field or right after picking. Sadly, some weren't as lucky as us. I'm just grateful we were able to get one and make our traditional pumpkin soup!

If you're not sure what to serve with pumpkin soup I recommend any kind of bun, bread, croutons, or crispy fried onion topping. Here are some suggestions:

You can store this soup in the fridge in an airtight container for up to 4 days or in the freezer for up to 6 months. It freezes really well! *Always reheat your soup to a rolling boil before serving.

Allow your soup to cool (but don't leave it out longer than 2 hours to prevent bacteria from starting to grow) before sealing and storing. This prevents it from tasting sour. *Divide large batches into small containers. Not only will they cool faster, you'll find it easier to fit them in the fridge or freezer to store and reheat them small amount at a time.

This Healthy Pumpkin Soup is made without cream and is not only Weight Watchers friendly, although it takes time, it's still easy to make and tastes gourmet. And even thought it can be eaten as a side, it's hearty enough for a meal!

And if you love pumpkin, try my Weight Watchers Crustless Pumpkin Pie! It's only 2 WW points on the blue plan. 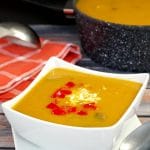 🎥 Videos Video: How to cook a pumpkin Video: How to deglaze a pan 🌡️Storing You can store this soup in the fridge in an airtight container for up to 4 days or in the freezer for up to 6 months. It freezes well! 💭 Top tips Allow your soup to cool before sealing and storing (but not longer than 2 hours, as that's when bacteria generally starts to grow). *This prevents it from tasting sour. Divide it into smaller containers to cool, as it cools faster and it's easier to store. * I use pre-cooked bacon. I takes less time and it's less messy to prepare. I buy it at Costco because the packages are larger and less expensive and you can pull out what you need, while keeping the rest of it in the freezer! 🎃Best Pumpkin for Pumpkin Soup It's recommended you use special cooking pumpkins, generically labeled “sugar pumpkins” or “pie pumpkins," (specifically named Baby Pam, Autumn Gold, Ghost Rider, New England Pie Pumpkin, Lumina (which are white), Cinderella, and Fairy Tale) when cooking with pumpkin.  However, I don't think this is necessary. We ALWAYS buy the exact same type of pumpkin as we would for carving jack o' lanterns (from the big bin outside the grocery store) and they always taste amazing! The key is that you puree the heck out of it before you bag it or it's too stringy! And then you drain off as much water as you can.  ⭐ REVIEWS Did you make this recipe? Please RATE THE RECIPE below! Here's what others are saying: "This is so thick and creamy on its own. I love the bacon and mushroom too. It makes it a whole meal.!"⭐⭐⭐⭐⭐ My Amazon Recommendations (affiliate links)