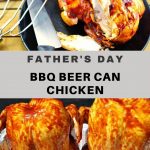 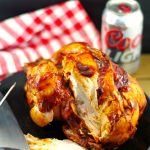 I found this BBQ beer can chicken recipe back in 2003 when it went through a surge of popularity and I haven't seen it around for a while, until I decided to make it again. There seems to be a resurrection. It's also a really healthy beer can chicken, as all the fat drips off the chicken into the pan. If you are looking for easy and healthy chicken dinner recipes for Father's Day, this is the one!

My Dad is 71,  I think.... I actually have to do the math now, as I have trouble even remembering my own age these days. My Dad is also a great BBQ'er - not sure if that's even a word. Either way, he makes the best BBQ chicken I have ever tasted. Mom says his secret is lots of BBQ sauce. BBQ chicken is obviously one of my faves and this easy, Weight Watchers Friendly Barbecue Beer Can Chicken recipe, also known as beer butt chicken, is no exception and the perfect meal for your Father's Day BBQ dinner @ 5 WW points per serving (blue plan).

You're also going to need some kind of holder for the chicken on the beer can. I use a large aluminum roasting pan and balance the chicken on top of the beer can (as shown in photo above). It's make-shift and can get a bit wobbly, but I make it work. However, you can buy beer can chicken stands like these ones (see Recipe NOTES)

If you want to make this recipe, you're going to need:

💭Best Beer for Beer Can Chicken

I really don't think it makes that much of a difference. I tried different types and brands of beers and they all taste great! However, if you want to keep it lighter, healthy and WW friendly (because you're also using it in the sauce) then you'll want to use light beer for this recipe

Beer Can chicken holders - my Amazon recommendations (affiliate links)
*Note: You'll need to keep the grill going for up to 1.5 hrs so make sure you have extra propane or are filled up *Note: Your grill will need to be high enough that it can close over an upright chicken and test it before you light it
Nutrition Facts
📋 BBQ Beer Can Chicken Recipe
Amount Per Serving
Calories 470 Calories from Fat 144
% Daily Value*
Fat 16g25%
Saturated Fat 4g25%
Cholesterol 80mg27%
Sodium 723mg31%
Potassium 857mg24%
Carbohydrates 57g19%
Sugar 55g61%
Protein 20g40%
Vitamin A 545IU11%
Vitamin C 4.5mg5%
Calcium 105mg11%
Iron 3.3mg18%
* Percent Daily Values are based on a 2000 calorie diet.
*** It is very difficult to get a nutritional analysis with this recipe. This nutritional analysis was assumes that you use ALL the BBQ sauce and that it stays on the chicken. (My family only used about ⅓ of it for 4 of us and much bakes off in a 1.5 hr cooking period) The calorie count and fat content per portion is reduced by using less BBQ sauce as well. I would prefer not to use a nutritional analysis on this recipe, but google requires it if you want to show up in searches. ***** In terms of WW points, I calculate it like a regular BBQ sauce (most seem to be 3 smart points for 2 tablespoon) depending on how much you use, as chicken is 0 points on the WW blue program, therefore I count 5 WW points per serving